But Liberty Mutual just can’t seem to commit to moving away from tar sands – and the fact that one of its longtime current directors is also a director of one of Canada’s biggest tar sands producers, and is personally profiting in the millions from those operations, may have something to with this.

Annette Verschuren has been a Liberty Mutual board member for the past 15 years. At the same time, she’s also served as a director of Canadian Natural Resources Limited (CNRL), one of Canada’s biggest oil and gas producers, with major tar sands operations, since 2014.

Verchuren has personally profited in the millions from CNRL’s fossil fuel operations. According to company filings, she owned nearly $3.4 million (Canadian dollars) in company holdings at the end of 2021. Moreover, at the end of 2020, her holdings were around $1.52 million. This means the value of her holdings in CNRL’s oil and gas business skyrocketed by nearly two million in just one year.

As we’ve shown, Liberty Mutual’s board is closely entangled with the industry, with nearly 70% of its directors having fossil fuel and extractive industry ties. Many personally profit from fossil fuels. Simply put, Liberty Mutual faces major conflicts when it comes to addressing climate issues.

Moreover, one Liberty Mutual director, Jay Hooley, is also the lead director of ExxonMobil, the top US oil supermajor. Hooley owns over $1.2 million (US dollars) in Exxon’s oil stock.

This is a huge climate conflict for Liberty Mutual: how can someone govern the insurance company on climate progress while also being the lead director of – and personally profiting from – a top oil company that wants to burn more oil and gas for decades to come and is dedicated to fighting climate regulation?

But if you think Hooley’s ties to the fossil fuel industry are bad, let us introduce you to another Liberty Mutual director: Annette “Tar Sands” Verschuren.

Annette Verschuren is a longtime director of Liberty Mutual, having joined the board in 2007. She also has an extensive career in fossil fuels and directs and profits from a major player in the Canadian tar sands oil industry, whose extractive operations are some of the dirtiest in the world.

Verschuren started her career in 1977 as a development officer with the Cape Breton Development Corporation, a coal mining company which long operated the largest underground coal mines in Nova Scotia.

But Verschuren’s most egregious tie to the fossil fuel industry is her governing role with Canadian Natural Resources Limited, one of North America’s most massive oil and gas producers. 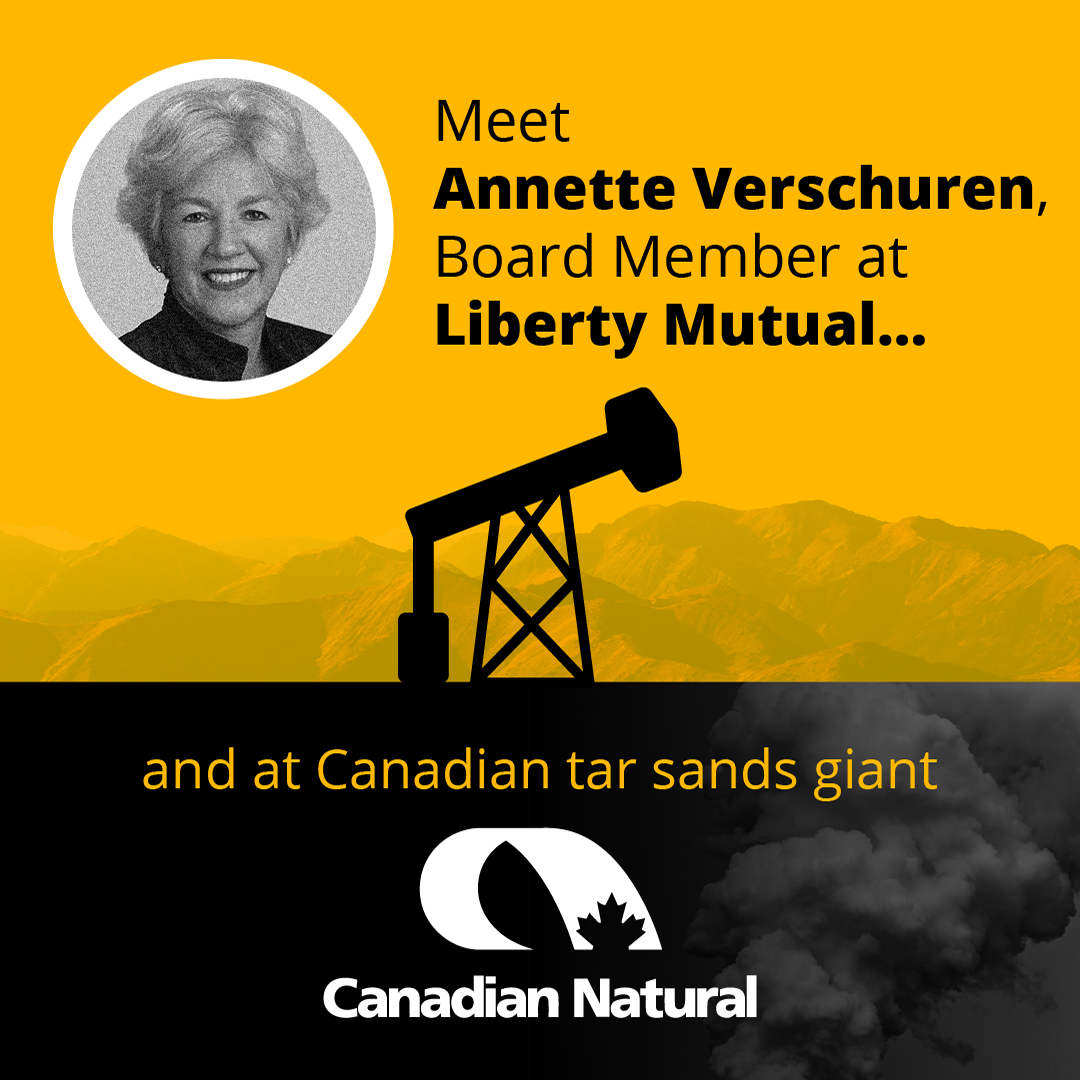 Verschuren has served on CNRL’s Board of Directors since 2014. CNRL has major operations across the fossil fuel production chain, from crude oil to natural gas. Reuters has called it “Canada’s biggest oil producer.” Moreover, as we discuss below, CNRL is a major player in the ultra-dirty business of the Canadian tar sands. And while 18 insurers, including US companies like AIG, The Hartford, and Travelers, have agreed to pull back from insuring tar sands operations, Liberty Mutual has so far refused.

Liberty Mutual director Annette “Tar Sands” Verschuren sits in the middle of all this. She’s a longtime member of CNRL’s governing heights, guiding and profiting from the company’s fossil fuel activities.

Verschuren has made big money from CNRL. Since joining the board in November 2014, she’s raked in nearly $1.7 million in compensation from CNRL, according to company filings. Last year alone, she made $233,125 as a board member. Her current CNRL holdings have an aggregate value of $3,374,479. (Figures here are in Canadian dollars; as of August 5, 2022, the exchange rate between the U.S. and Canadian dollars is $1 to $1.29).

Moreover, the extent to which Verschuren is personally profiting from CNRL’s oil and gas business has skyrocketed since 2020. CNRL reported the aggregate value of her holdings in 2020 at $1,518,824. But in 2021, those holdings leaped to their most recently reported level of $3,374,479 as CNRL’s stock value boomed.

This means that – as our climate crisis accelerates and as Liberty Mutual comes under increasing pressure to distance itself from fossil fuels and especially dirty tar sands – Verschuren’s CNRL fossil fuel wealth actually more than doubled – growing by $1.8 million, or 122%  – in just one year.

CNRL is one of Canada’s oil and gas powerhouse corporations, carrying out major operations and raking in huge profits. According to Forbes, the company is worth an astounding $74.7 billion. While much of the world worries about our growing climate catastrophe, CNRL’s 2021 annual report flaunts the fact that they produced a record volume of production of 1.235 million barrels of oil equivalent per day (BOE/d). On top of their billions in net income in 2021, CNLR also bragged about their “significantly increased returns to shareholders” to the tune of $3.8 billion.

CNRL is also dedicated to fighting climate regulation that could help address our climate catastrophe. Leaked documents show that it was a large part of the lobbying efforts to exempt oil and gas facilities in Alberta from serious climate regulation, particularly those designed to decrease methane emissions from heavy oil production.

It’s understandable that CNRL might want to weaken climate regulations – after all, its core business is in oil and gas extraction, and it consistently ranks as venting the most methane gas among other operators in Canada’s Alberta province. But what’s not clear is how Liberty Mutual, which claims to want to address climate concerns, can justify having a director in Annette Verschuren who governs and profits from CNRL’s dedication to extracting and producing oil and gas that intensifies our climate crisis.

And when it comes to CNRL’s tar sands operations, the climate conflicts for Liberty Mutual and Annette Verschuren are even worse.

The tar sands are toxic and carbon-intensive oil reserves. Their extraction fuels climate change, damages the land they’re extracted from, and displaces and poisons the communities living on the extraction and transportation sites, particularly Indigenous communities. In its life cycle, the amount of greenhouse gases emitted from tar sands are 30% higher than conventional oil.

The Financial Times has called CNRL one of Canada’s “most aggressive producers” in oil sands (another name for tar sands). Tar sands mining made up approximately 36% of CNLR’s total corporate production in 2021. According to Reuters, CNRL also operates Alberta’s “most emissions-intense oil sands facility,” its Peace River site.

The tar sands industry has been an environmental justice catastrophe for Canada’s First Nations. These operations displace Indigenous communities and pollute their life-sustaining resources, leading to increased cancer rates and respiratory illnesses due to their exposure. Environmental violations from tar sands operations have been documented for years and continue until today.

Not Liberty Mutual, though. In 2019, two subsidiaries of the company provided more insurance to this project than any other major insurance company. Furthermore, filings with the Canada Energy Regulator show that Liberty Mutual has a very close relationship with TC Energy, the Canadian energy company that was behind the now-canceled Keystone XL tar sands pipeline (the cancellation of Keystone XL cost CNRL a whopping $143 million) and a number of existing oil and natural gas pipelines.

We know that as of 2020 Liberty Mutual was insuring the original Trans Mountain Pipeline, and as of 2021 it was insuring tar sands pipelines in general. In 2021, Trans Mountain filed to keep its insurers secret, which has prevented updated disclosures of its insurers. However, it is likely that Liberty Mutual remains an insurer of the original pipeline and its expansion.

It should raise serious alarm that Liberty Mutual has insured, and is likely still insuring, the Trans Mountain Pipeline at the same time that one of Liberty Mutual’s board directors, Annette Verschuren, also sits on the board of Canadian Natural Resources, who will be using the pipeline expansion for its business operations and has a vested interest in seeing it built.

Moreover, it’s equally alarming that Liberty Mutual is keeping its insuring of tar sands operations shrouded in secrecy since it could be facing serious climate conflicts in its governance – namely, that it is insuring dirty operations that directors like Annette Verschuren have a hand in governing and personally profiting from.

It’s an ill-advised financial move for Liberty Mutual to insure tar sands pipelines, which are  becoming less profitable to invest in. Even Canada’s parliamentary budget officer said that the Trans Mountain pipeline is no longer profitable.

On top of everything else, Verschuren has several affiliations with so-called “sustainable” businesses. She is the chair and CEO of NRStor, which she touts as a “trailblazing clean-tech firm,” and the Verschuren Centre for Sustainability in Energy and Environment, which describes itself as an “independent clean technology development and deployment facility” that helps companies develop “sustainable solutions that meet industry needs,” is named after her.

While sustainability commitments are important, it’s hypocritical for Verschuren to promote  “green” tech while also remaining committed to expanding and profiting from some of the world’s dirtiest fossil fuels.

What will Liberty Mutual do?

It is hard to fathom how Verschuren can both govern Liberty Mutual on climate progress while also governing and profiting so immensely from the oil and gas business. Having Verschuren as a director of a major insurance company like Liberty Mutual while she simultaneously directs a company profiting from some of Canada’s biggest fossil fuel extraction operations begs the question: do her close ties to CNRL and its tar sands operations have influence on why Liberty Mutual still does not have a tar sands policy?

Liberty Mutual’s insistence on insuring dirty fossil fuel operations continues to threaten climate and communities. Climate and Indigenous rights organizations have been calling on Liberty Mutual to publicly cut ties with Trans Mountain. They are also asking insurance companies to divest from tar sands companies and rule out insurance for tar sands extraction, transport projects, and companies that are active in the tar sands supply chain, as well as adopt a policy to ensure the projects it insures have obtained the Free, Prior, and Informed Consent of impacted Indigenous Peoples, as per the United Nations Declaration on the Rights of Indigenous Peoples.

Liberty Mutual should also end its secrecy around its insuring of dirty fossil fuels. To address potential conflicts on its board and for the sake of transparency for stakeholders and impacted communities, Liberty Mutual must issue updated disclosures of any insurance of tar sands operations, including of infrastructure like the Trans Mountain Pipeline.

Finally, Liberty Mutual needs to immediately address the climate conflicts on its board. Simply put, no one can have any faith in the company’s ability to adequately address climate concerns while its board members are also directing and profiting in the millions from fossil fuel powerhouses like ExxonMobil, CNRL, and others, who remain dedicated to the business of extracting and and burning fossil fuels and fighting climate regulation.

This report was written in partnership with our friends at Rainforest Action Network.