By now, it’s no secret: insurance companies can play a key role in helping the world steer away from mounting climate catastrophe by refusing to underwrite the expansion of dirty oil, gas and coal infrastructure. That’s why climate advocates, environmental justice organizers and concerned stakeholders have been escalating their demands on big insurers to stop propping up the fossil fuel industry and all its associated climate and financial risks.

Few insurance corporations are bigger, and have more of a responsibility to act on climate, than Liberty Mutual. That’s why it’s so alarming that Liberty Mutual board member Joseph “Jay” Hooley just became the new Lead Director of ExxonMobil, perhaps the most powerful Big Oil supermajor on the planet.

ExxonMobil is one of the largest fossil fuel companies in the world. It is directly responsible for driving our global climate catastrophe as well for actively stalling climate progress for decades. Hooley joined ExxonMobil’s board of directors at the beginning of 2020 – and now, as ExxonMobil’s Lead Director, he is moving up the ranks to lead that board and oversee the governance of one of Big Oil’s top multinational powerhouses.

In this new role, Hooley will be responsible for ensuring that ExxonMobil continues to rake in profits from its core business of oil and gas extraction and production for decades to come. He will also continue to earn compensation that gives him a personal financial interest in seeing ExxonMobil’s business boom. Hooley currently owns 13,000 shares of ExxonMobil – worth well over $1 million – and his stake in the company is only set to grow. Hooley has a clear personal financial interest in seeing the company’s core business expand.

All this presents a grave conflict for Liberty Mutual, where as a board member, Hooley is in charge of governing the insurance powerhouse as it navigates a future of climate chaos and climate risk. While not nearly sufficient, Liberty Mutual has made gestures around climate by, for example, limiting insurance coverage for some coal-intensive companies and pledging a 50% reduction of Scope 1 and 2 global greenhouse gas emissions by 2030. Hooley’s governing role and financial interest in a global Big Oil powerhouse raises major concern over whether he can help guide Liberty Mutual through even these minor commitments, let alone toward the much bigger commitments that stakeholders and advocates demand.

Moreover, Hooley’s oil and gas ties are just the most egregious of several other climate conflicts on Liberty Mutual’s board, with well over half of the company’s board having personal financial ties and governing and executive responsibilities tied to fossil fuel interests and extractive industries.

All this presents a stark conflict at the heart of Liberty Mutual’s governance: how are board directors like Hooley supposed to responsibly guide one of the world’s biggest insurance companies through the demands of the climate crisis while simultaneously governing over and personally profiting from the expansion of climate-destroying fossil fuel operations?

Jay Hooley became ExxonMobil’s new lead director following the annual stakeholder meeting on May 25th, 2022. In this role, Hooley will be the most powerful non-executive member of Exxon’s board, which oversees the entirety of the corporation’s affairs. He will practically be running the show for ExxonMobil’s governing body.

Hooley’s responsibilities will include engaging with shareholders, setting the agendas for and chairing executive sessions, and leading the annual performance evaluation of the board, among other key functions.

In serving as ExxonMobil’s lead director, Hooley will be guiding a company dedicated to expanding its oil and gas production and promoting climate denialism to stall climate action.

ExxonMobil is one of the world’s most powerful and influential corporations. The company raked in over $14 billion in profits in just the last two quarters, and it has pledged to leverage those profits into billions of dollars worth of stock buybacks. In the US, Exxon is expanding its oil and gas operations in the Permian Basin, the busiest oilfield in the world. Because of its decades of dedication to extracting and burning fossil fuels, Exxon has been a main driver of carbon emissions into our environment that have accelerated the global climate crisis. 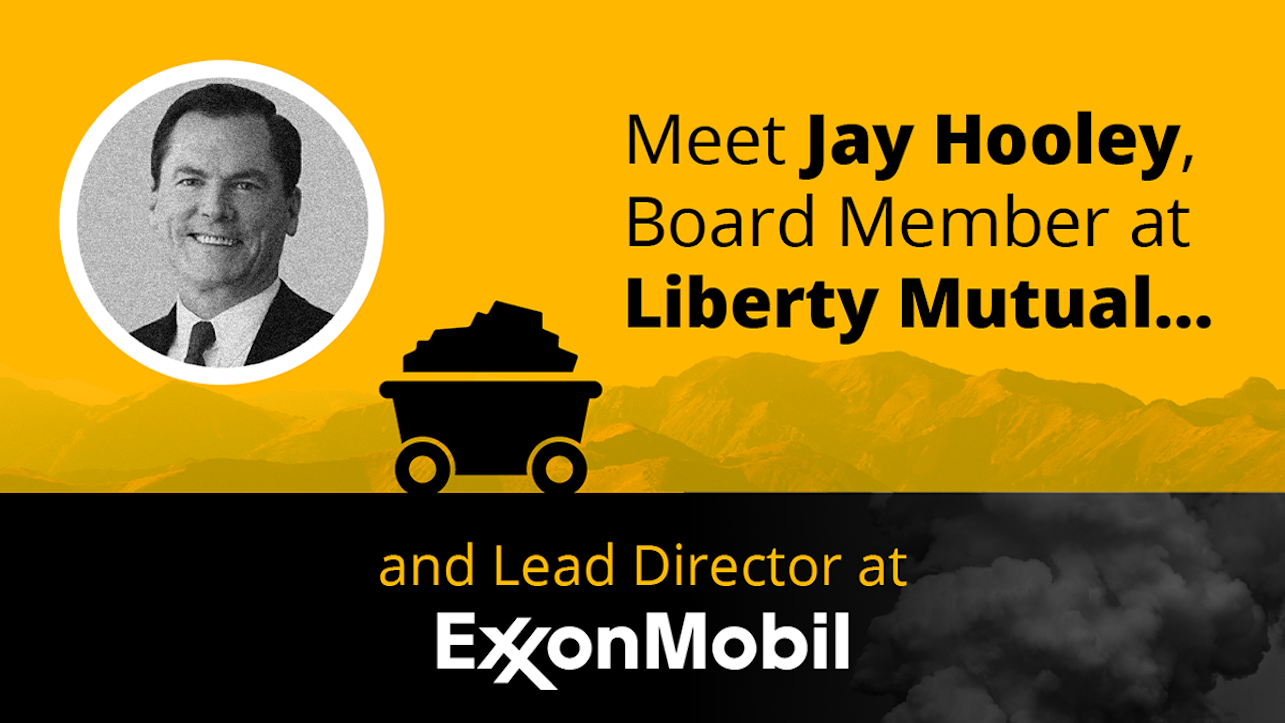 Hooley and ExxonMobil: A Major Conflict for Liberty Mutual

Considering all this, one wonders how Hooley can justify serving on the board of Liberty Mutual while at the same time being responsible for guiding the board of one of the world’s biggest oil corporations whose core business deeply conflicts with climate goals.

ExxonMobil’s most recent annual report clearly states that the company’s “principal business involves exploration for, and production of, crude oil and natural gas.” Moreover, the “risk factors” identified in the report include increased climate regulation, denial of oil and gas permits, new efficiency standards, and other measures that we need to address the climate catastrophe. It is clear that ExxonMobil sees new climate regulation as a core threat to its business.

Hooley also faces major climate conflicts around his personal financial stake in ExxonMobil. According to Exxon’s proxy statements, Hooley took in $675,311 in compensation in 2020 and  $214,295 in 2021 for a total of $889,606 in compensation over the past two years. The bulk of this compensation was awarded in the form of stock awards. According to his most recent SEC disclosure, Hooley currently owns 13,000 shares of Exxon Mobil stock. These shares were worth $1,227,200 at the close of the U.S. stock market on May 24, 2022, when Exxon’s share price closed at $94.40.

All this means that, as ExxonMobil and the fossil fuel industry continue to profit from oil and gas operations, so will Hooley. With Hooley’s personal stake in fossil fuels, how can anyone trust him to also help oversee, as a board member, the climate demands that must be core to Liberty Mutual’s business in the years ahead?

Moreover, Hooley’s position also raises concerns over conflicts if Liberty Mutual insures any fossil fuel projects that Exxon is connected to, such as pipelines, refineries, or other infrastructure. With Hooley’s leading role at Exxon, Liberty Mutual must disclose any business it conducts with ExxonMobil and assure stakeholders that Hooley is not personally profiting from this business or otherwise abusing his director role at Liberty Mutual to benefit Exxon.

It’s also worth noting that Hooley’s location at the intersection of finance and fossil fuels is not new. Before joining the boards of ExxonMobil and Liberty Mutual, he was the President and CEO of State Street Corporation, generally considered the world’s third largest asset manager. State Street drew extensive scrutiny around the time of Hooley’s tenure because of its massive fossil fuel portfolio.

Ironically, while leading the board of a company that thrives on extractive industry and systems dependent on fossil fuels, Hooley is also a director of Aptiv, a self-proclaimed green tech company – once again, showing how he’s swimming in conflicts of interest.

Hooley is not the only example of conflicts of interest at the core of Liberty Mutual’s governance when it comes to climate issues and the fossil fuel industry. As an extensive 2021 DeSmog investigation showed, Liberty Mutual’s board is awash in oil and gas ties.

Today, an astounding 9 out of 13 Liberty Mutual board members – a whopping 69% – have close ties to, and are personally profiting from, extractive industries. These include:

These conflicts could be a reason that, despite Liberty Mutual’s acknowledgement that “fossil fuels are the driving factor contributing to climate change,” it does not address the imperative for ending fossil fuel expansion and phasing out coal, oil, and gas business in its most recent sustainability reports. Beyond its existing coal policy, Liberty Mutual does not rule out insurance of new oil and gas projects nor does it outline practical timelines or steps to phase out insuring sectors that are carbon-intensive energy sectors. Liberty also does not address Indigenous rights or other human rights impacts from the projects it insures.

By contrast, ten major insurers have policies restricting insurance for new oil and gas projects, thirteen insurers have adopted restrictions on insuring oil and gas drilling in the Arctic National Wildlife Refuge, and more than fifteen have restricted support for the tar sands oil sector.

What will Liberty Mutual do?

Companies like Liberty Mutual fuel climate change and environmental injustice when they insure and invest in fossil fuel projects and companies. Given the severity of the climate catastrophe and the imperative to limit global warming to meeting the 1.5ºC goal, these firms must stop insuring fossil fuel expansion immediately, phase out existing fossil fuel insurance contracts in line with 1.5ºC, and divest from shares and bonds in those companies.

For Liberty Mutual, the urgency of implementing such policies – or taking any real action around climate – faces conflicting pressures and interests when its board members are directly governing oil and gas companies and benefiting from the fossil fuel industry’s expansion. 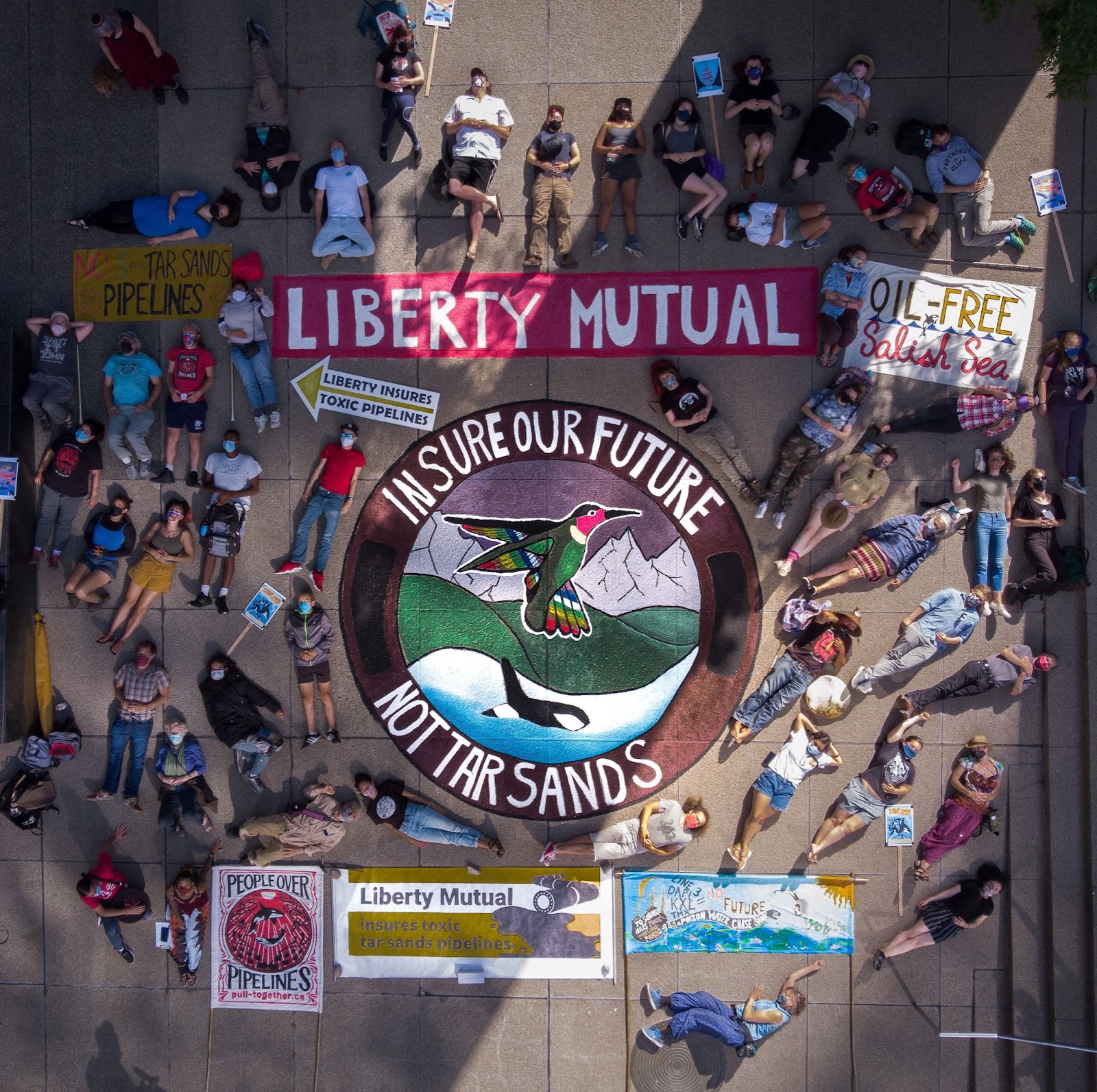 Jay Hooley’s position as lead director of ExxonMobil while also serving as director of Liberty Mutual raises these exact concerns. Hooley plays a governing role for a Big Oil supermajor whose core business is in oil and gas and which sees increased climate regulation as a threat to its profits. Hooley is also personally profiting from Exxon’s business through his board compensation and stock ownership. At the same time, he is playing a governing role for Liberty Mutual when the insurance giant is under pressure to take meaningful action on our climate crisis and address climate risks.

To have any real faith that Liberty Mutual can lead on climate – the most crucial issue any insurance company is facing in the midst of the climate catastrophe – the company must address the egregious climate conflicts at the core of its governance.

This report was written in partnership with our friends at Rainforest Action Network.