Over the past 10 years, GM has gone from bankruptcy to record profits, paying out billions of dollars in dividends and executive compensation as rank-and-file wages have stagnated and plants have shuttered. According to GM filings with the Securities and Exchange Commission, the company paid out $2.3 billion to shareholders in dividends and stock buybacks and nearly $56 million in compensation to CEO Mary Barra and other executives in 2018.

In November 2018, GM announced that it was cutting 15% of its salaried workforce and idling five North America plants. One of the plants that was “unallocated” is the Lordstown Assembly near Youngstown, Ohio where President Donald Trump promised to bring jobs back to the region at a rally just after his inauguration in January 2017. Between Trump’s rally and the closure of the Lordstown plant, GM CEO Mary Barra sat on the President’s short-lived CEO council and GM endorsed Trump’s 2017 tax bill, which helped to drive the company’s $4.5 billion in stock buybacks that year.

Below, we profile some of the financial interests that have reaped the rewards of GM’s post-bailout success while workers have seen their pay languish and their jobs eliminated. 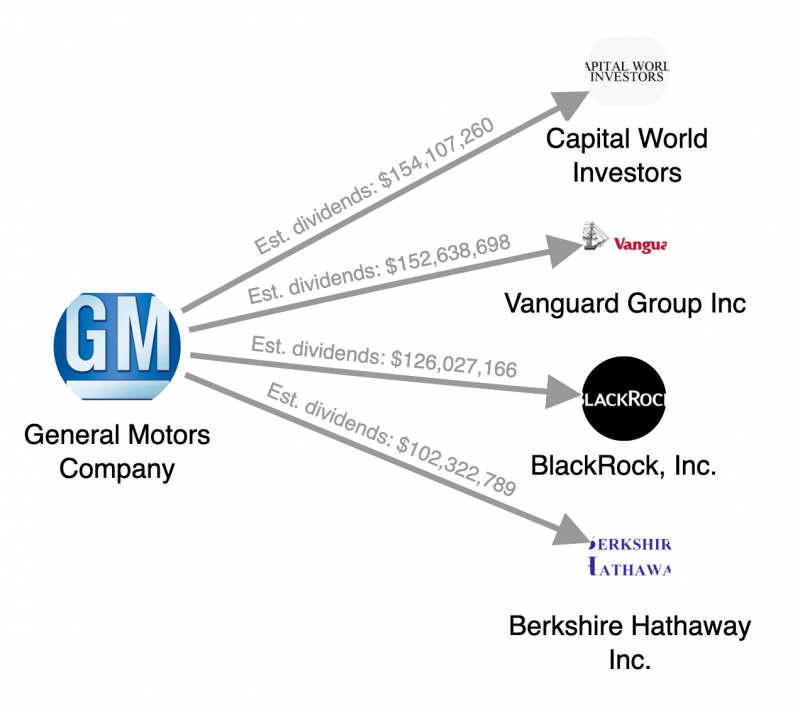 View this map at LittleSis

During the Great Recession kicked off by the 2008 financial crisis, General Motors declared bankruptcy and was bailed out by the federal government to the tune of $50 billion. The government acquired a 61% equity stake in GM, which it began selling off in November 2010, eventually taking an $11.2 billion loss to keep the automaker afloat.

Buoyed by the public investment, GM returned to profitability and has since posted record profits – totaling $8.1 billion in 2018.

While GM’s financial success has failed to trickle down to workers on the factory floors, hedge funds and other financial management firms that own a substantial portion of GM stock have been richly rewarded. From 2016 through 2018, GM has paid $6.6 billion in dividends to shareholders and bought back $7.1 billion in stock according to the company’s most recent annual report filed with the SEC.

In the past four quarters, the four outside investors that own the most GM stock have been paid more than $535 million in dividends, contributing to the huge fees earned by portfolio managers. These investors include the massive asset management firms Capital World Investors, Vanguard Group, BlackRock, and Berkshire Hathaway. The dividends paid to each firm can be seen in the table below.

Executive Leadership and Board of Directors

As the Chief Executive Barra receives a compensation package that includes her base salary, stock options, short term incentive pay, and a performance bonus. In total, Barra received $21.8 million for her role. In addition to her annual compensation package, Barra is accruing a post-GM safety net through the Executive Severance Program. Upon retirement, Barra is guaranteed at least $38,389,634.

One of Barra’s performance metrics noted in GM’s 2018 proxy statement is the return of “$2.3 billion to shareholders through dividends and share repurchase.” That stock repurchase was blasted by some of GM’s owners in a shareholder proposal that recommended separating the board chair from the CEO role to address such “questionable practices.” 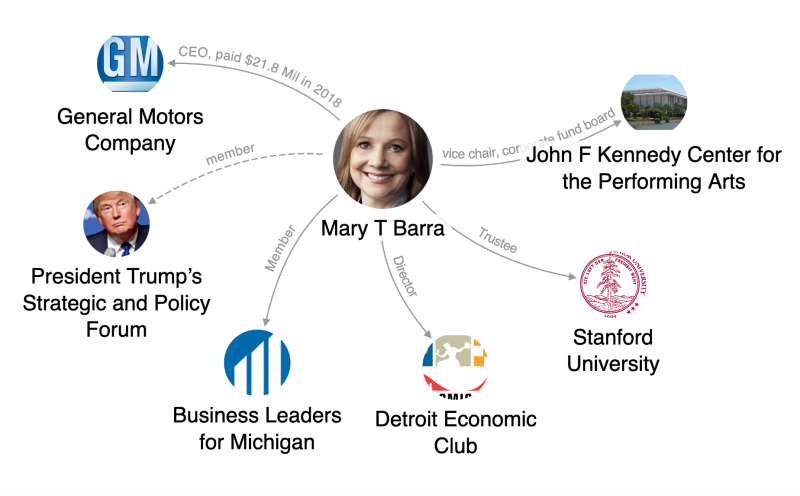 View this map at LittleSis

Barra is an active corporate entity, participating in elite policy planning circles, cultural institutions, and academia. She is a member of Michigan’s most prominent and powerful business lobby, Business Leaders for Michigan and a Director of the Detroit Economic Club. She is also a Vice Chair of the Corporate Fund Board of the John F. Kennedy Center for the Performing Arts and a trustee at Stanford University.

Barra was a member of Trump’s strategic and policy forum, a group of elite CEOs led by Steven Schwarzman advising the president on economic policy. Despite gathering in the shadow of other controversies, including the Muslim travel ban, the group only disbanded after Trump’s odious remarks about a deadly white supremacist gathering in Charlottesville, Virginia caused wide public outcry. Despite this episode and Trump’s barrage of tweets targeting GM, Barra agreed to speak with him in a secretive, closed door meeting, a move that could indicate that she is ultimately looking to be an ally to the President. Trump’s 2017 corporate tax cuts were a major boon to GM, which came out as a vocal supporter of the plan. In 2017 alone, GM bought back $4.5 billion worth of its stock, inflating the value of outstanding shares and driving performance bonuses for Barra and other executives.

GM is led by an eleven member board of directors with ten independent directors and CEO Barra serving as Chairman. The board includes retired executives from defense giants Lockheed Martin and Northrop Grumman, a retired CEO of Harvard Management Company, a retired CFO from Walmart, and a retired CEO from pharmaceutical giant Novartis AG. GM’s board is unusually engaged and Barra has credited them with helping her “run the company on a regular basis.”

In 2018 GM’s independent board members received an average of $285,350 in base cash compensation, stock awards, and a leased company vehicles. This average is down slightly from the 2017 average of $342,374 due to the pro-rated compensation packages of two directors who joined the board during 2018.

The table below details the compensation information for the rest of the General Motors executive leadership team.

Like most large corporate entities the GM PAC tends to donate across the aisle. In 2016, GM PAC donated $237,745 to the Cleveland 2016 Host Committee for the RNC and $75,000 to the Philadelphia Host Committee for the DNC. However, in June 2018, GM PAC contributed $5,000 to Great America Committee, a super PAC backing Donald Trump.