Despite his reputation as a leader on climate policy, California Governor Jerry Brown has been criticized for making major concessions to the oil industry – which, along with other fossil fuels, is a key driver of the global climate crisis.

Our new report sheds light on a previously unknown channel through which Big Oil sought influence over Brown: a handsomely-paid lobbyist who is a longtime friend, advisor, and former staffer of Brown’s.

Lucie Gikovich, a principal of the Crane Group, has been the top-paid California lobbyist for Phillips 66 since late 2012 – they have paid her $937,500 in fees and retainers to lobby in California, where they own two major refineries. Gikovich has also lobbied Brown’s office for Halliburton, SoCalGas, and other clients.

Gikovich and Brown have been very close friends and colleagues for decades. She was a top aide during Brown’s first stint as California Governor from 1975 to 1983, and she was his press secretary during his failed 1982 U.S. senate run. While Brown was mayor of Oakland, the city paid Gikovich $780,000 to serve as a registered federal lobbyist. Gikovich and her firm gave $114,500 to Brown between 2005 and 2010, with most of it going to his 2010 gubernatorial run. On election night in 2010, Gikovich celebrated Brown’s victory at his campaign headquarters in Oakland.

After Brown began his second stint as governor in 2011, Gikovich capitalized on her ties to Brown to become a top oil lobbyist in the state, even as she and Brown remained close personal friends. Brown stayed at Gikovich’s home on multiple trips to Washington, DC, while he was governor, and he brought her as an official business representative on trade delegations to China in 2013 and Mexico in 2014. According to press reports, Brown considers Gikovich one of his closest outside advisors. Gikovich’s former employee at her lobbying firm, Jamie Callahan, even became Brown’s Director of External Affairs in 2015.

(Again, you can read all about this in our new report).

We found several instances where Gikovich’s lobbying efforts of Brown’s office correlated closely with decisions that Brown made that were favorable to her oil industry clients:

In addition, the report highlights other examples where Gikovich’s lobbying efforts resulted in Brown vetoes of legislation that benefited her clients. One Brown veto killed legislation that would have prevented a waste dump near sacred tribal land near San Diego. ArcLight Capital Partners, which was invested in the waste dump, hired Gikovich to lobby Brown on the bill. The other Brown veto stopped legislation that would have given more public oversight over land use decisions in downtown San Diego. Business interests in San Diego hired Gikovich to lobby Brown against the bill.

Our report has been covered by Jessica Goodheart of Capital & Main – her story was also co-published by Fast Company. In the article, Gikovich and a spokesperson for Brown tried to downplay the role that Gikovich’s lobbying efforts played in influencing oil and gas policy under Brown.

Gikovich claimed that her lobbying on cap-and-trade for Phillips 66 was mostly confined to monitoring the legislation and that she had “no contact with the Governor personally on these issues.” But the idea that Phillips 66, one of the most powerful oil companies in the world, would have paid Gikovich, with her unique connection to the governor of a top oil-producing state, more than any other lobbyist in California to not try to influence policy strains the bounds of credulity nearly to the breaking point.

Gikovich claims she had no contact with Brown personally around cap-and-trade. But it’s worth noting a few things: Brown and Gikovich are close friends – as we reported, Brown even stays at her home. Because of this, we have no way of truly knowing what they discussed together during their private time. It is clear that, based on their long and close relationship, Brown deeply trusts Gikovich, and that Gikovich is paid big sums to protect the interests of her oil industry clients. This makes it hard to believe that business surrounding her powerful clients never came up in their discussions.

Moreover, Gikovich did not need to talk directly to Brown in an official manner to influence his cap-and-trade policy – Brown’s staff, who answer to the Governor, surely know that Gikovich is the Governor’s close friend. Indeed, Brown’s Director of External Affairs, a cabinet level position, is a former employee of Gikovich.

The influence of a lobbyist comes from their relationship – bolstered by money and the power of the client, or trust born from personal ties, or both – with the official they lobby and their office. Phillips 66 valued Gikovich’s relationship with Brown enough to make her their highest compensated lobbyist of his office for years.

And it appears to be a known fact in California that, if business interests want to try to influence Brown, they should hire Gikovich. For example, the Sacramento Bee reported that San Diego business interests did just that in 2015 to get a Brown veto of a bill they opposed (Brown vetoed it shortly after Gikovich became a lobbyist against the bills).

On her lobbying around the Brown veto of the bill to help Aliso Canyon victims, Gikovich was quoted as saying “she submitted a lengthy policy memo, but did not speak to Brown or his staff.” But lobbying often consists of lobbyists writing memos that they provide to elected officials, which contain policy formulations and wording that those officials can use to legislate in favor of the lobbyist’s client. Gikovich’s explanation answers very little – for example, what did her policy memo that she submitted to Brown’s office on behalf of SoCalGas actually contain, and did it influence Brown’s veto to the detriment of Aliso Canyon victims?

Gavin Newsom should support an investigation into Gikovich’s lobbying efforts in California under Jerry Brown and into whether or not Brown committed ethics violations by staying at the home of a registered lobbyist with business before his office. Only this can bring more transparency to the mechanisms of the oil industry’s influence over California politics and legislation and help restore public trust. 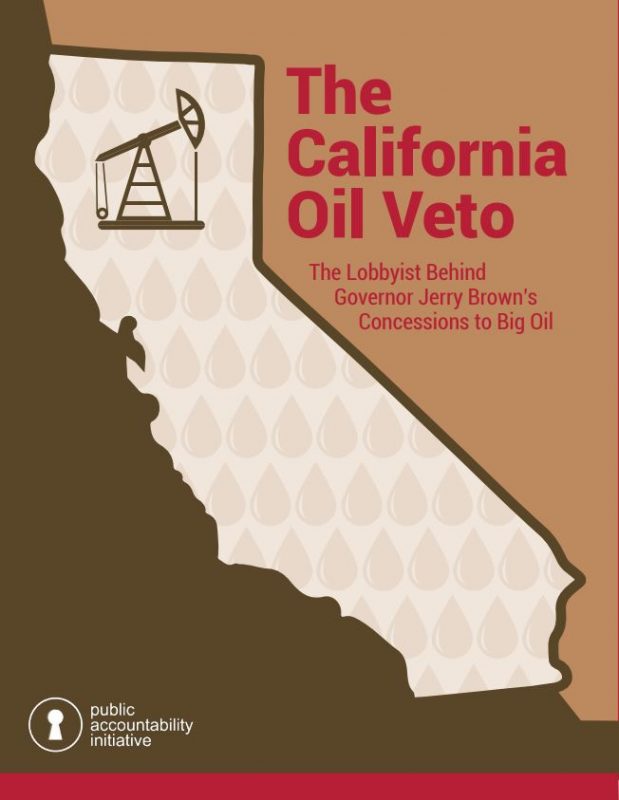