If built, the plant will lock in new sources of carbon emissions for decades to come. This occurs at a time when Gov. Andrew Cuomo is trying to position himself as a climate progressive and is facing growing calls for a more aggressive moves towards 100% renewable energy

Yesterday, the Public Accountability Initiative and New York Communities for Change released a new report titled Putting the Scam in Danskammer: Trump-linked Wall Street Billionaires Financing a Polluting Fracked Gas Plant and Sticking New Yorkers With the Bill. 350.org and Orange RAPP also signed onto the report’s release. (Note: Eyes on the Ties and LittleSis.org are projects of the Public Accountability Initiative).

On Thursday a coalition of groups released a report demanding that instead of allowing a new plant run by a pollution-generating fossil fuel, the state should reject Danskammer’s proposal and speed up the transition to renewable energies.

The report’s specific key findings are listed below, but the report has two overarching arguments.

First, the Danskammer proposal represents a profit grab by a group of Wall Street investors with close ties to the far right, including Donald Trump, Sebastian Gorka, and the Heritage Foundation. They are billionaires and multi-millionaires who have histories of giving huge amounts – sometime through nontransparent channels – to corporate candidates to help advance their interests. The plant will enrich a collection of wealthy investors while hurting the climate and local communities.

Second, Danskammer will be a polluting plant that will lock in higher carbon emissions for decades to come. An opaque and complex pricing system will allow Danskammer owners to profit more while sticking consumers with the cost. The real solution here is to turn away from new fossil fuel infrastructure and move towards 100% renewable energy, now.

The report calls on Andrew Cuomo to deny the necessary permits for Danskammer and – as the hashtag goes – #StopTheDanScam.

Here are the report’s key findings:

You can read the full report on the web or as a designed PDF. 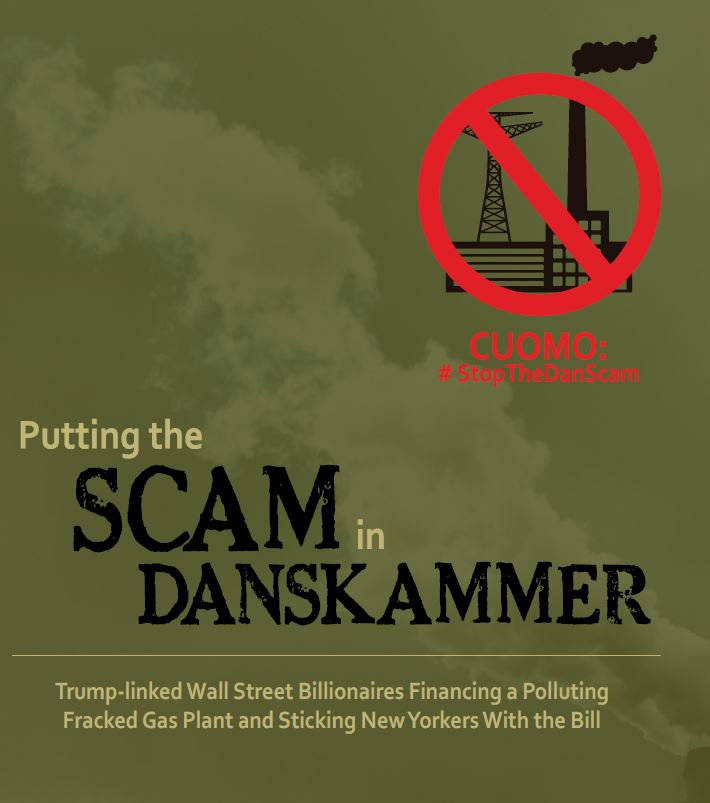