As FERC overruled the New York DEC to save the Millennium pipeline, FERC was being lobbied by Michael McKenna, CPV’s top federal lobbyist. CPV paid McKenna $180,000 in 2017 to lobby FERC – and only FERC.

Even more, McKenna had temporarily served as Donald Trump’s energy department transition head before he went back to lobbying FERC. This means he likely had a hand in shaping – and may retain ties to – FERC and the Department of Energy of which FERC is a part (more on McKenna’s ties to FERC below).

In other words: Trump’s FERC overruled New York State to approve a pipeline that CPV needed while CPV paid big money to a Trump insider lobbyist who was formerly in charge of shaping FERC as it currently stands.

We documented all this in a report that we released earlier this month, “The Percoco Connection: The Money Trail Linking Competitive Power Ventures, Cuomo, and Trump.”

While there is no hard proof that McKenna lobbied FERC on the CPV plant and Millennium Pipeline – McKenna just said he lobbied on “Energy Issues” – the Valley Energy Center is a top priority project for CPV that has been threatened both by the corruption trial of Andrew Cuomo aide Joseph Peroco – who took $285,000 in pay-out money from a top CPV executive – and by the intense opposition to the Millennium Pipeline that will serve the CPV plant. As mentioned, FERC has the power – and used it in late 2017 – to overrule the New York DEC’s decision to halt the pipeline.

(This post is focused on McKenna and his relationship to CPV, Trump, and FERC. For more on the Percoco scandal and its ties to CPV and its New York State lobbying efforts, see our full report)

As we discuss in our report, McKenna is a longtime revolving door lobbyist who headed Trump’s energy department transition for close to three months in late 2016.

Prior to becoming a lobbyist, McKenna worked in George H. W. Bush’s Department of Energy and served as Policy and Planning Director in the Virginia Department of Environmental Quality, where he worked from 1994 to 1997. McKenna was forced to resign from the DEQ when it was discovered that he wrote a memo that advocated using dirty tactics – such as press leaks and threats of lawsuits – against Virginia Governor George Allen’s opponents. One state senator compared his proposals to Nazi propaganda tactics. An unapologetic McKenna signed his resignation letter with just two words: “I resign.”

McKenna started lobbying through a firm called MWR Strategies – where he appears to be the sole lobbyist – in 2004. From 2004 to 2017 he raked in $9.3 million by lobbying for just 13 corporations – mostly from the fossil fuel and chemical industries –  including CPV, Southern Company, American Power Electric, and Dow. He also lobbied for Koch Industries from 2008 to 2016, for a total of $670,600.

Donald Trump chose McKenna to head his energy department transition in September 2016. This put McKenna in a position to also potentially influence the priorities and composition of FERC, which comes under the department’s purview.

In other words, McKenna was going to have a shot at shaping the very oversight entities that regulate his fossil fuel clients – including CPV – that had paid him millions to lobby for the last decade.

We know that McKenna wanted to see an even more fossil fuel-friendly FERC. As our report stated, McKenna was sometimes quoted in the media criticizing Obama’s FERC appointees. He called the Paris Climate Agreement an “annoyance” and wanted to gut the Clean Power Plant Act and Clean Water Acts.

For McKenna, however, the lure of profiting from lobbying outweighed his desire to continue to serve in the Trump administration. After Trump made a new rule that any agency landing team officials would need to de-register as lobbyists and refrain from lobbying for five years after they left, McKenna decided to resign his position in the Trump transition on November 18, 2016.

McKenna’s reign as the Trump energy transition leader didn’t last long, but the fact that he was appointed at all indicates that he was seen as a fossil fuel industry insider who would defend the industry’s interests. It’s worth noting that McKenna was replaced by Thomas Pyle, a climate change denier who heads up the Koch-funded Institute for Energy Research and its advocacy wing, the American Energy Alliance. In other words, Trump went from a Koch lobbyist to a Koch think tank head to drive the effort to shape the administration’s energy department.

Moreover, there’s evidence that McKenna had some influence in shaping FERC even during his short tenure as Trump’s energy transition head. As we reported:

At an April 2017 luncheon at the Energy Bar Association, an energy industry conference, McKenna participated on a panel with Shannon M. Bañaga, another energy lobbyist who also had to leave the Trump transition because of the lobbying rule. (Pyle was supposed to be on the panel but canceled due to illness). Bañaga recalled the heavy workload that “us unsavory lobbyist-types” – lobbyists like herself and McKenna – put into the Trump energy transition, including meetings with industry representatives. Of FERC specifically, she commented, “I can’t express to you how many man-hours were put into very specific ideas about what FERC should be working on in the next couple years.” (Bañaga, who had previously worked for FERC as an attorney, has since become TECO Energy’s director of federal affairs after leaving the Trump transition. A consulting firm that tracked Trump’s transition appointments had floated her name around for a position in or around FERC.)

We also know that during a November 29, 2016 official meeting, McKenna introduced Pyle – who by then was Trump’s new energy transition head – to Thomas A. Fanning, the CEO of Southern Company, who was (and continues to be)  McKenna’s client. 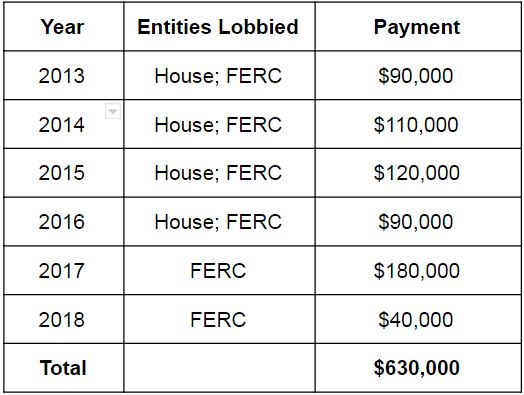 Again, it’s worth noticing that the high point of McKenna’s lobbying for CPV was in 2017, as the CPV plant and the pipeline that would service it faced increased pressure – only to be aided by FERC, now with a Trump-appointed majority, in late 2017.

Below is an annotated map of the relationship between CPV, McKenna, Trump, and FERC, and here’s the link to our report. You can also check out what journalist Mark Hand wrote about McKenna in which he referenced our report.