Skip to content
Joseph Percoco heads up the steps to his corruption trial in Jan. 2018
.

As the indictment of top Cuomo aide Joseph Percoco loomed over Albany last year, Competitive Power Ventures took no chances when it came to protecting and advancing its controversial fracked gas power plant, which was tied to the Percoco scandal. CPV drastically ramped up its lobbying efforts in both Albany and DC in 2017, spending hundreds of thousands of dollars to buy political influence through a handful of Cuomo- and Trump-connected lobbyists.

This is the main finding behind our new report, “The Percoco Connection: The Money Trail Linking Competitive Power Ventures, Cuomo, and Trump.”

The report is called “The Percoco Connection” because it makes the point that the ramped up lobbying efforts by both CPV and Millennium Pipeline of the Cuomo administration and Donald Trump’s FERC – described briefly below and more thoroughly in the report – were very likely propelled by the indictment of Joseph Percoco and the increased scrutiny this scandal brought to the process that went into approving the CPV Valley Energy Center.

Some specific findings of the report include:

For more elaboration on all this, read the full report and see the slideshow map at the end of this post. And for coverage of the report, see NY State of Politics, Politico New York Energy, and Think Progress. 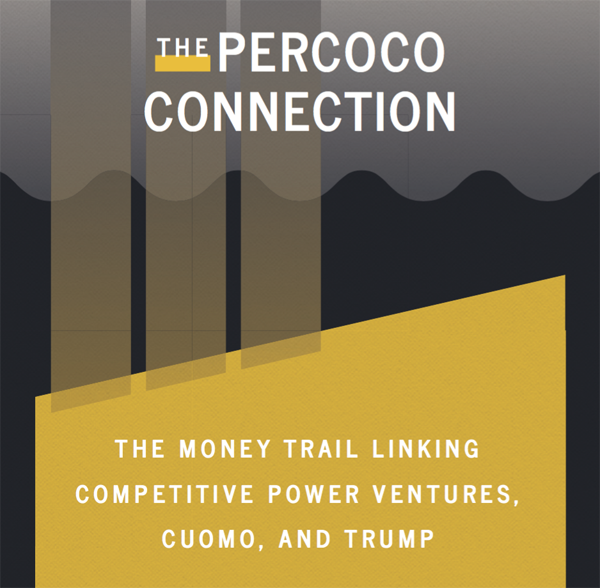 Joseph Percoco was a top aide to Andrew Cuomo who was indicted on corruption charges in November 2016 that were tied to soliciting and accepting money from a CPV executive. CPV channeled $285,000 to Peroco’s wife through a “low-show” job, which a jury found was actually a payment in exchange for Percoco’s help in winning state power purchasing contracts from the CPV Valley plant. Percoco was convicted on felony charges in March 2017 and awaits sentencing.

The CPV Valley Energy Center in Orange County, New York is a 680 megawatt fracked gas combined-cycle electric generation facility that is set to begin delivering energy in the summer of 2018. Nearby residents have strongly opposed the plant for environmental and health reasons, as well because the Percoco scandal shows that the plant approval occurred under the spectre of corruption.

In their responses, neither CPV nor their lobbyists engaged with the factual content of our report.

Cuomo has recently started to escalate his environmental rhetoric. For example, he banned fracking in New York State and called for the state’s pension fund to divest from fossil fuels.

But if Cuomo wants to make a strong signal that New York is committed to a 100% renewable energy future, he could revoke the permit for the CPV Valley Energy Center and thereby halt the fossil fuel emissions that the plant will lock in for decades to come.

This slideshow map – based on the findings of our report – takes you through the CPV Cuomo/Trump lobbying swamp in the aftermath of the Percoco indictment.