The Pilgrim Pipeline – a proposed 178-mile double pipeline that would run underground from Albany, New York to Linden, New Jersey – has stirred a lot of opposition, particularly from members of the Ramapough Lenape Nation, as well as property owners whose land the pipeline would cross.

But the truth is, we haven’t heard much about Pilgrim recently. The billion-dollar pipeline, which would carry 200,000 barrels a day of fracked Bakken crude oil southward and the same amount of refined oil products northward, has been in a state of limbo. It hasn’t even been able to find terminals at either end of the pipeline that will agree to connect to it.

You couldn’t blame someone for thinking the pipeline is dormant, if not dead in the water. But not so fast. 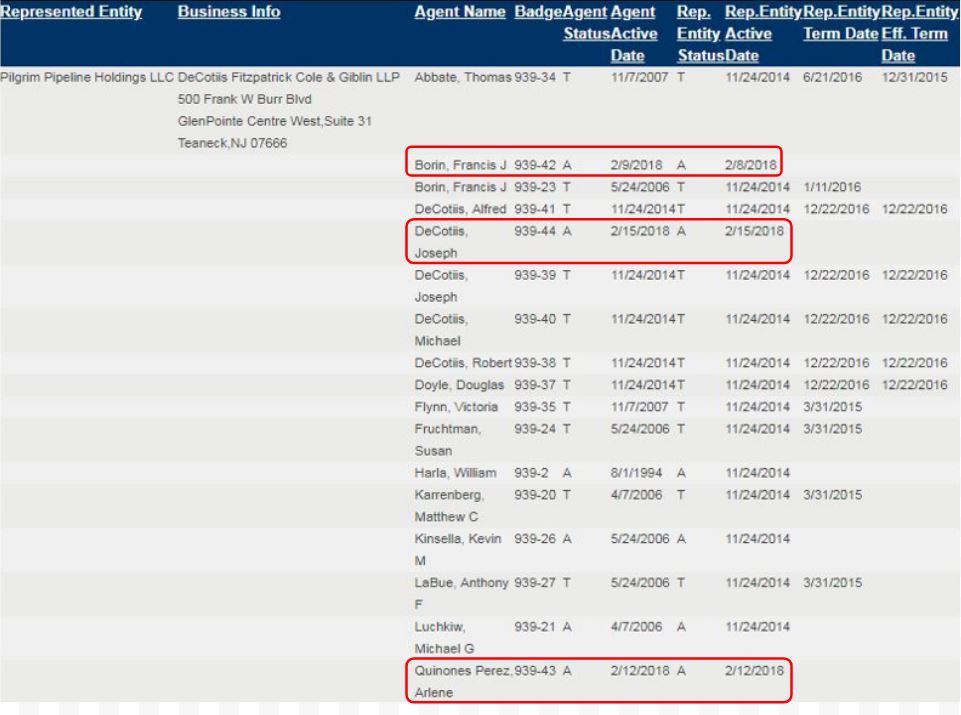 Moreover, two of the lobbyists – Quinones-Perez and DeCotiis – have ties to the new administration of Phil Murphy. Quinones-Perez is a member of Murphy’s Budget transition committee, while DeCotiis is on Murphy’s Transition Counsel.

This raises an interesting question: if the Pilgrim Pipeline is dead, why did it just hire these new lobbyists?

It is also worth noting that Pilgrim hired them to lobby after two of the lobbyists were appointed to Murphy’s transition committees. This suggests, possibly, that pipeline executives saw these appointments as an opportunity to seek out a line of influence to the new administration.

Francis J. Borin is a well-connected lobbyist and attorney who is registered to lobby for other fossil fuel clients that include Spectra Energy, the North American Energy Alliance, and NJ Coalition for Fair Energy. He works with utilities clients and has experience with a range of agencies, including the Department of Environmental Protection.

DeCotiis and Quinones-Perez aren’t the only lobbyists with pipeline ties that have spots on Phil Murphy’s transition committees. As we pointed out last month, five PennEast pipeline lobbyists and one state fossil fuel coalition lobbyist are also in his transition, as are a range of other people tied to the fossil fuel industry. While Murphy has so far indicated that he may stand up to the industry, it’s important to keep an eye on the industry’s attempts to influence his administration through these ties.

As we reported last year, the executive management of Pilgrim Pipeline Holdings has some ties to the Koch brothers, and the pipeline was supported strongly by Chris Christie, a Koch brothers’ ally. Pilgrim lobbyists – including lobbyists from the Bolton St-John’s and Ways & Means NY firms – also have pushed for the pipeline in New York State – though the company didn’t lobby in New York during 2017.