Welcome to Eyes on the Ties’ Friday Fossil Fuel Runoff! This weekly series highlights the power relationships behind recent developments in the oil and gas industry. We include links to the week’s stories in oil and gas news with important context from LittleSis, including power maps made by the LittleSis community of researchers and original research by the Public Accountability Initiative. If you have any feedback or tips, or would like to subscribe to an email version of these posts, please send us an email at [email protected]!

The move highlights widespread concern that the E.P.A. will silence government scientists from speaking publicly or conducting work on climate change. Scott Pruitt, the agency administrator, has said that he does not believe human-caused greenhouse gas emissions are primarily responsible for the warming of the planet. Read about it at the New York Times.

See our map of Scott Pruitt’s corporate ties at LittleSis.org 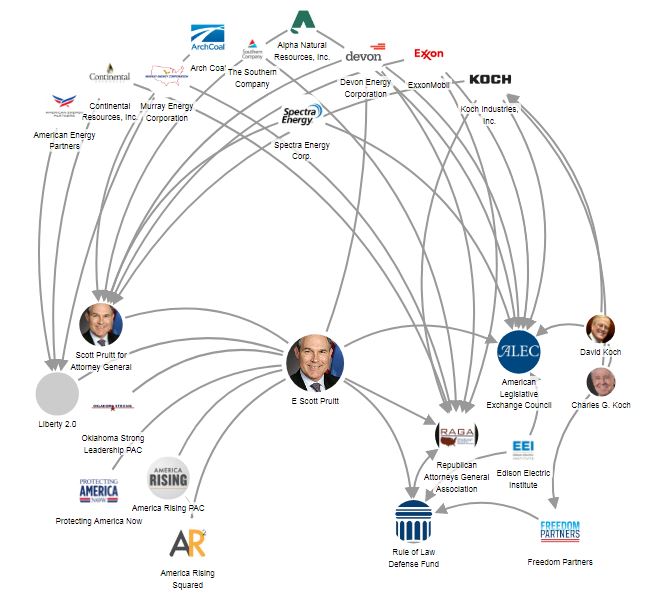 In what is regarded as an unusual step, a group of 13 young people have joined together to become court sanctioned intervenors as they fight a proposed Enbridge Energy pipeline through northern Minnesota… The group sees the pipeline as carrying some of the dirtiest oil in the world – from the Alberta tar sands – and as potentially harmful to Minnesota’s lakes and wetlands if an accident occurs.

Read about it at Midwest Energy News.

The California Governor says he’ll use the courts to “block the erosion of US climate actions.” Read about it at Climate Change News.

But is Brown the “Green Governor” he’s cracked up to be? See our recent post at Eyes on the Ties. Also check out our map of Brown’s million dollar conflict of interest at the Aliso Canyon gas field, which was shut down after experiencing a historic gas leak that caused thousands of home evacuations… and which Brown just allowed to be reopened.

Read about how the fossil fuel industry is increasing its tracking of pipeline protests. From the Progressive Pulse.

And on this topic, also see the letter here from 84 members of Congress asking the government to label pipeline protesters terrorists. Check out the list of signees at LittleSis.org.

“While victims in Texas, Florida, and Puerto Rico are still reeling from the devastation of three hurricanes worsened by a warming climate, the Trump administration and GOP senators in the Gulf continued to push fossil fuel extraction.”

That’s all for this week! Remember, if you want to receive an email version of this newsletter or have any tips for us, send us an email at [email protected]!