If Donald Trump was planning to drain the swamp, he certainly wasn’t talking about the military-industrial complex.

Trump has officially nominated John C. Rood for the position of Undersecretary of Defense for Policy, the Pentagon’s third most powerful job. Rood is a senior executive at Lockheed Martin, and before that, had a senior position at Raytheon.

With Rood’s nomination, all three of the Pentagon’s highest leaders will have had recent positions with major defense contractors. Defense Secretary James Mattis was a board member of General Dynamics, while Deputy Secretary of Defense Pat Shanahan was a senior executive at Boeing.

To put it another way: the top trio at the Pentagon have recent close ties to, and have profited handsomely from, the top four US defense contractors.

Rood has been the senior vice president of Lockheed Martin International since March 2016. Lockheed describes his role in the company as being “responsible for developing and executing strategies to grow Lockheed Martin’s international business and with strengthening customer relationships and industrial partnerships in the 70 countries where Lockheed Martin does business today.”

Prior to his appointment to senior vice president, Rood was Lockheed’s vice president of government affairs, where he played a managerial role in overseeing the “government relations activities” of the company’s US field offices.

Before he joined Lockheed in 2014, Rood had worked for Raytheon, another defense industry powerhouse. Rood was Raytheon’s vice president for U.S. business development. He joined Raytheon in March 2009.

According to Business Insider, Lockheed is the top defense contractor in the US, with $29.4 billion in federal contracts in 2016, while Raytheon ranks thirds, with $12.3 billion.

Though below the very top tier of executive leadership, Rood’s senior management role likely made him very wealthy.

Government Career before Lockheed and Raytheon

Prior to entering the private defense industry in March 2009, Rood had a lengthy twenty-year career in government. In fact, he went to work for Raytheon just mere weeks after the end of the Bush administration, in which he served, in January 2009.

A running theme throughout Rood’s government career is his work around weapons systems, especially missile defense.

Rood began his career working for the CIA sometime around the late 1980s, where, among other responsibilities, he analysed foreign missile programs. After eleven years with the CIA, he became senior policy adviser to Arizona’s former Republican Senator, Jon Kyl. Rood stayed with Kyle for four years, leaving in 2001 to join the National Security Council.

Rood served in the administration of George W. Bush for most of Bush’s eight years in office, at the National Security Council and Pentagon:

In 2008, he negotiated Poland’s hosting of a U.S. anti-missile system. The gesture was aimed at Russia and was seen as further heightening US-Russian and European-Russian tensions. One source says that “Rood played a significant U.S. role for the negotiation and completion of agreements with Poland and the Czech Republic to host a European Missile Defense system.”

Rood left the Bush administration in January 2009, when Obama was inaugurated, and quickly stepped into his lucrative eight-year career at Raytheon and then Lockheed Martin.

Rood has an interesting connection to a somewhat cryptic pro-missile defense non-profit run by an ex-NFL linebacker.

Rood has been on the advisory board of the Missile Defense Advocacy Alliance (MDAA) since 2009. According to its website, the MMDA “seeks to generate public support for the continued testing, development and deployment of missile defense systems to protect our country and our allies.” It claims to have “grown to over 14,000 members across the world and has emerged as the top lay expert voice on missile defense in the world.”

The MDAA is run by former NFL linebacker Riki Ellison, who is its founder and chairman. The Twitter profiles of both MMDA and Ellison are filled with news concerning missiles, weapons productions, and defense companies, and images of Ellison with politicians and other figures.

In 2014, the most recent year for which compensation figures are available, MDAA paid Ellison $375,000. In years prior to 2014, he has also been paid hundreds of thousands of dollars. Ellison has taken loans from MDAA; for example, in 2014, he was loaned $51,000 as an advance on his bonus by the MDAA board, which, in 2014, contained only three members besides Ellison (the MDAA website currently has only one board member besides Ellison).

MDAA claims it is a “non-partisan organization” that “does not advocate a particular company, system or product,” but this claim to impartiality is compromised by the revelation that in 2012 it accepted at least $40,250 from defense contractor Northrup Grumman, $7,625 which was used for lobbying purposes.The MDAA took in close to a million dollars in contributions in both 2013 and 2014, but it doesn’t disclose its donors.

But more broadly, MDAA is committed to lobbying for the expansion of weapons systems from which the defense industry as a whole profits. Ellison lobbied Congress, the White House, the Pentagon, and the State Department constantly from 2003 to 2013 to “advocate the testing, development and deployment of missile defense systems.” In 2003, Ellison reported $400,000 in lobbying compensation, though later filings don’t report lobbying expenses of more that $5,000.

Rood also sits on the board of Youth Impact Program (YIP), a non-profit which Ellison founded and chairs and to which MMDA advances tens of thousands of dollars. Rood is one of just three YIP board members besides Ellison. 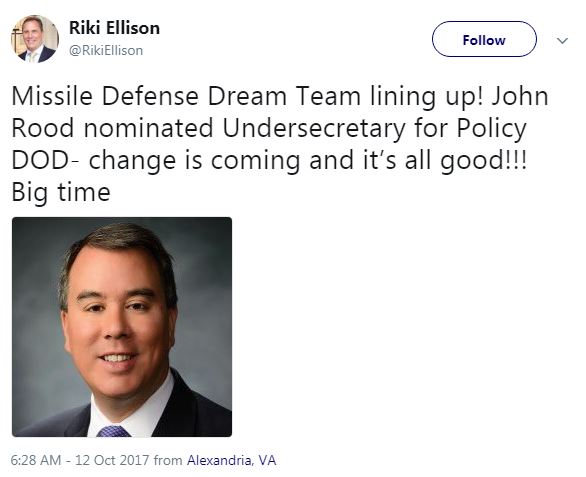 Rood’s ties to MMDA and Ellison suggest that his appointment to a top-ranking Pentagon position meshes with Trump’s reported support for building up missile defense systems — and the ramped up military spending that would go along with that.

The Trump Administration and the Defense Industry

Rood’s nomination is just another example — albeit an important one, given that he’ll occupy the third highest position in the Pentagon — of the revolving door between the defense industry and the Trump administration.

Along with Mattis, Shanahan, and Rood, Trump has nominated or appointed other defense industry figures to high-up military and defense positions. For example:

And the list goes on. With Trump and Congress set to boost military spending, the defense companies that figures like Rood are connected to may stand to profit more than ever.