The cozy relationship between the oil and gas industry and the government agencies assigned to regulate it is a well-documented problem. New sources obtained by the Center for Public Integrity further confirm this.

Among other things, the documents reveal further evidence that the three corporations behind the controversial Atlantic Coast Pipeline — which is still awaiting final approval from FERC — have had close access to FERC. The CEO of one of the three ACP companies even attended a private dinner with Honorable.

The sources were obtained by CPI through a Freedom of Information Act request. CPI posted the documents in a new report they published on FERC and the build out of pipeline infrastructure from Appalachia.

The documents contain several instances of close exchanges between FERC and EEI — exchanges which reflect the broader problem of the too-cozy relationship between regulators and industry.

The emails between Honorable and EEI’s Director of External Affairs, Kwame Canty, are a prime example of this. Less than two hours after Canty emailed her on April 28, 2015, Honorable responds with “Congratulations on your new role with EEI!,” initiates a private meeting (at her office or after work, “Whatever your pleasure”), and ends with: “Best regards as you begin your new journey with EEI. Great place to work – great people too. Warm regards.” 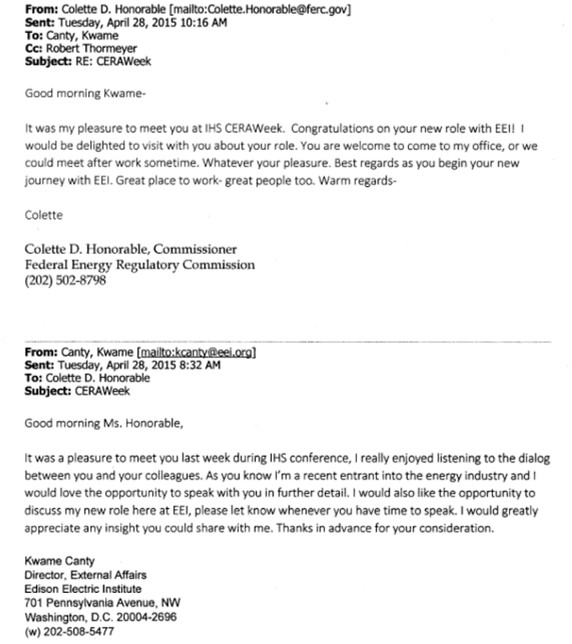 Another series of exchanges that reflect the close relationship between the former FERC commissioner and the utilities industry occurred when EEI President Thomas Kuhn set up a private dinner between Honorable and six energy CEOs.

Here is Kuhn’s pitch to Honorable, with her response: 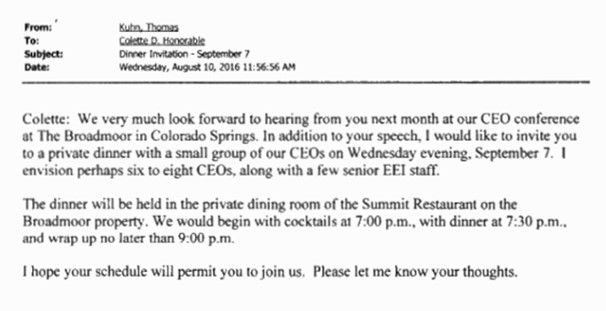 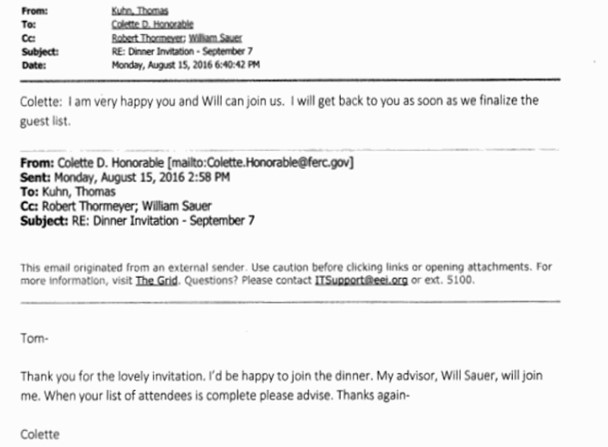 And below is Kuhn’s email with the list of CEOs attending the private dinner — to which Honorable responds: “Sounds terrific. Looking forward to it. Thanks Tom!” 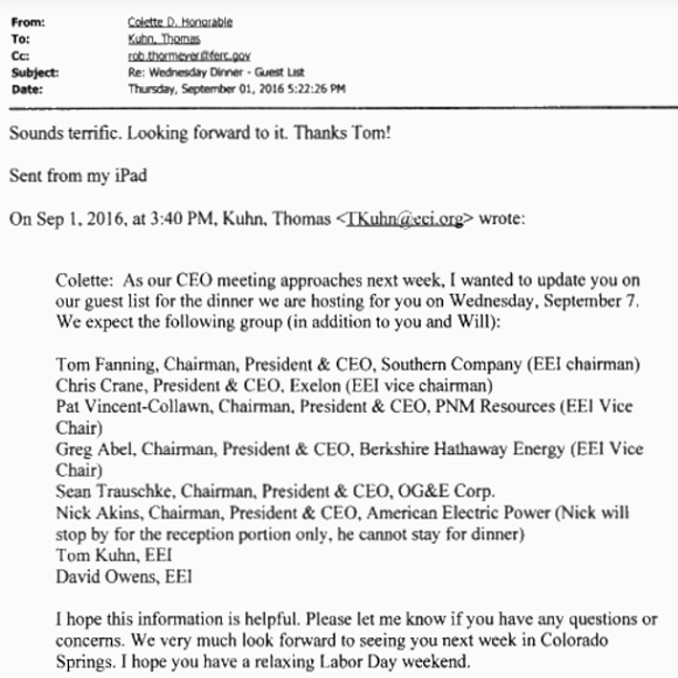 The private dinner — and the friendly relationship between EEI and FERC more broadly — is also a window onto the easy access that the companies behind the Atlantic Coast Pipeline have with government regulators.

One of the attendees of the dinner, Tom Fanning, is the CEO of Southern Company Gas, one of the three companies behind the Atlantic Coast Pipeline. The dinner occurred while the pipeline proposal was under review by FERC.

Again, these are just a few examples of many contained in the newly revealed documents that show the ties between Honorable and the EEI, reflecting the close relationship that the ACP companies, through their affiliation with EEI, have with FERC.

Honorable was appointed as a FERC commissioner by President Obama in 2014. She served on FERC for two and half years, stepping down on June 30, 2017. A week after she left FERC, she joined Reed Smith LLP, a law firm that lobbies for Dominion Energy, the driving force behind the Atlantic Coast Pipeline.

EEI has also been behind efforts to roll back the use of solar rooftop energy, according to a recent New York Times article. Big utilities companies see the payment for rooftop solar renewable energy that goes back into the energy grid as a threat to their profits.