The Ramapough Lenape Nation’s resistance to the proposed Pilgrim Pipeline is picking up steam — and support.

The National Lawyer’s Guild, one of the premier networks of progressive lawyers in the US, announced on June 1st that it had “joined forces” with the Ramapoughs to “support their efforts to hold religious ceremonies, protest the proposed Pilgrim Pipeline to be built on tribal lands, and challenge litigation that threatens their rights.”

The Ramapough Lenape Nation in and around Mahwah, New Jersey has been a key force resisting the Pilgrim Pipeline — a proposed 178-mile double pipeline that would stretch from Albany, New York to Linden, New Jersey. The pipeline has generated enormous controversy and opposition in the communities that stand to be impacted by its construction and its eventual presence. If built, the pipeline would push fracked crude oil and refined oil products along the Ramapo river and through Ramapough tribal lands. 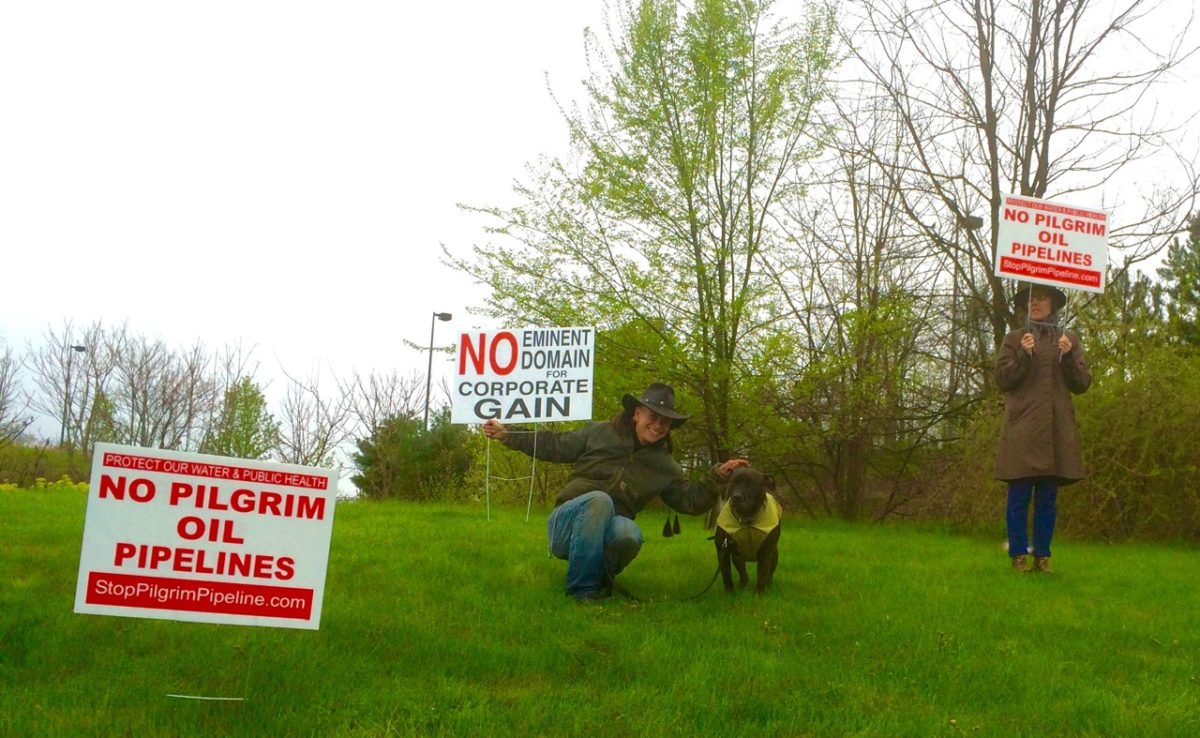 (The power behind the Pilgrim Pipeline — the financing, elites ties, lobbyists, and revolving door concerns behind the controversial project — was the topic of a March 2017 report by the Public Accountability Initiative, the first of our “Power Behind the Pipelines” series.)

The plight of the Ramapoughs was highlighted in a recent New York Times profile, “The Ramapoughs vs. the World,” which centered on the tribe’s battle against the Pilgrim Pipeline.

The article puts their fight against the Pilgrim Pipeline into historical context:

[F]or the Ramapoughs, a group of indigenous people native to the highlands around Mahwah, N.J., life has often been a series of excruciating struggles over rights and resources. The tribe has an embattled history marked by colonial occupation, environmental degradation, discrimination, and clashes with politicians and real estate developers. Over the years, they have been left greatly diminished, a proud tribe working to stave off eradication and invisibility.

The NYT profile delves into this history of injustice, but also transitions to describe the mood of hope and resistance that’s now come with the fight against the Pilgrim Pipeline:

But the Ramapoughs have experienced something of an awakening in recent months. After a developer proposed an oil pipeline that would run through their native land — and potentially threaten the region’s water supply — the tribe began a wave of protests that has drawn together its dwindling members. They were galvanized further by the election of President Trump, whom they see as an enemy to the environment and indigenous life at large — and an old foe of the tribe in particular. Now this small and beleaguered community is preparing for battle with forces both local and national.

The Ramapoughs’ opposition to the Pilgrim Pipeline ties them to the wider resistance movement among indigenous groups in the US and Canada against the construction of new oil and gas pipelines that threaten their land rights and water sources. This conflict between indigenous land rights and oil and gas industry interests has put native groups on the front lines of the wider environmental movement.

This fact has been highlighted starkly in the resistance to the Dakota Access Pipeline and its Standing Rock encampment. The anti-DAPL fight has become of the great cause celebres of modern times, inspiring millions of people throughout the world. Indeed, according to the Lawyer’s Guild, when the Ramapough Lenape Nation founded its Split Rock Prayer Camp in October 2016 to oppose the Pilgrim Pipeline, it also did so to show solidarity with the resistance in Standing Rock.

And like the fight at Standing Rock, which was in opposition to a pipeline being funded by a slew of major banks, the Ramapoughs are also pitted against powerful players in the world of finance. 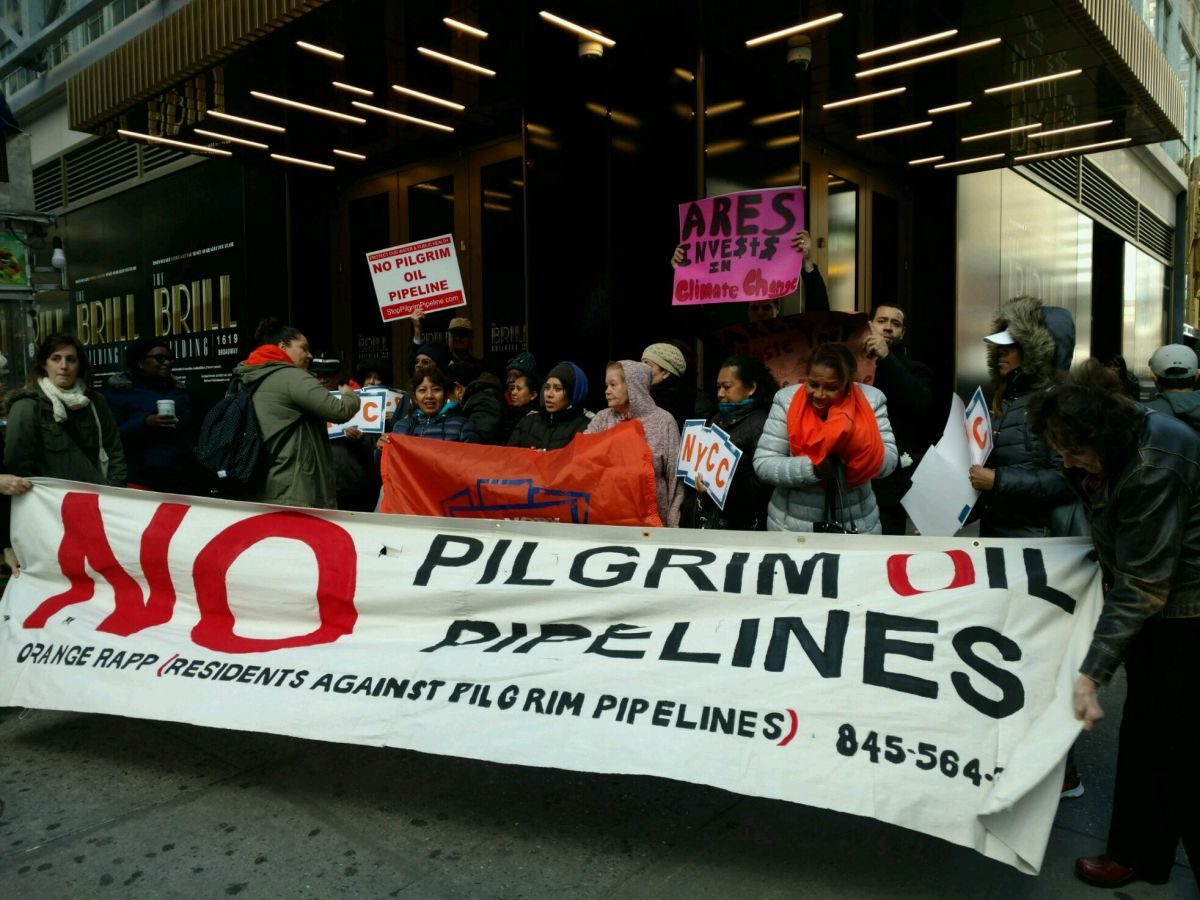 A key funder of the pipeline is Ares Management, a private equity firm that manages around $100 billion in assets. It’s CEO Tony Ressler also co-founded Apollo Management, one of the world’s richest hedge funds. Apollo manager Leon Black is Ressler’s brother in law who reportedly owns a $2 billion art collection.

Ressler also owns an NBA franchise, is a key force in the charter school movement, and sits on the boards of the Los Angeles County Museum of Art and Cedars-Sinai Medical Center, which gives him close access to a range of economic and cultural elites. These ties of Ressler’s are profiled in PAI’s May 2017 “Frackateer of the Month” installment.

Even more, the company that’s pushing the pipeline, Pilgrim Pipeline Holdings, LLC, has top management with close ties to the Koch brothers. New Jersey Governor Chris Christie, a big supporter of fracking and pipeline construction, has also been a close ally of the Kochs, taking in millions of dollars in donations from them when he was head of the Republican Governors Association.

On top of all this, Pilgrim Pipeline Holdings, LLC has hired lawyers with ties to Christie — one of their firms even has a former partner who has worked in the Christie administration. And Christie’s Department of Environmental Protection Commissioner was a longtime private consultant to businesses in the oil and gas industry.

All this information can be founded in PAI’s Pilgrim Pipeline report.

While these all may be powerful opponents, the momentum against the Pilgrim Pipeline is strong. Virtually every county which the pipeline will cross has come out in opposition to it, as has the New Jersey Senate and Assembly. Pilgrim Pipeline Holdings, LLC has as yet been unable to secure terminals at either end of the pipeline’s route.