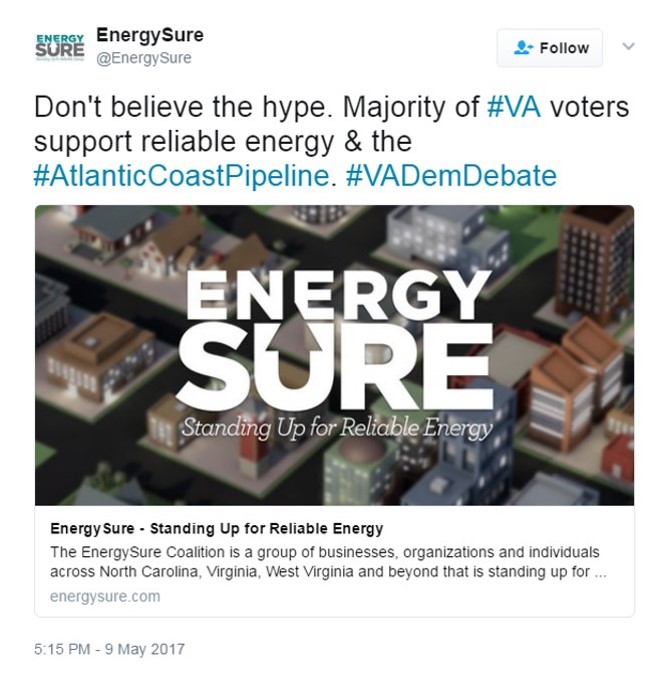 The tweet was referring to the results of an October 2016 poll by the Tarrance Group that claimed 55% of likely Virginia voters supported the controversial Atlantic Coast Pipeline (ACP).

This claim is dubious, however. The underlying poll was based on a single loaded question, performed by a pro-industry conservative polling company with ties to a pro-ACP politician, and backed and paid for by the same corporate interests that are pushing for the pipeline.

EnergySure is a business-backed coalition that in part operates as a public relations wing for the ACP. The group is funded by the four companies behind the pipeline — Dominion, Duke Energy, Piedmont, and Southern Company Gas.

EnergySure and its members include the companies behind the ACP, local and state chambers of commerce, and a who’s who list of energy and construction industry backers and business organizations, from the Virginia Coal and Energy Alliance to the North Carolina Petroleum Council.

The timing of the EnergySure tweet is not coincidental. Dominion, the main force behind the ACP, is facing political heat at home, with a leading Democratic gubernatorial candidate sharply opposing the pipeline. Grassroots action is also escalating. On May 10th, scores of protesters demonstrated outside its annual shareholders’ meeting.

Aware of the “recent increase in vocal opposition” to the ACP, EnergySure announced in October 2016 the results of a poll that the Virginia Chamber of Commerce, a coalition member, released that claimed 55% of Virginians supported the pipeline.

The poll “affirms what EnergySure Coalition members already know,” said the corporate coalition. “Virginians support the pipeline by a margin of nearly two to one.” A Virginia newspaper wrote that Dominion was “celebrating” the poll results, which have since been often cited by ACP backers.

However, a closer look at the poll and the people behind it raise some serious questions.

The poll was conducted by the Alexandria, Virginia-based Tarrance Group, which openly proclaims itself as “one of the most widely respected and successful Republican strategic research and polling firms in the nation” and prides itself on helping to get dozens of Republicans elected.

Even more, the Staunton, Virginia-based News Leader reported that, in the 2014 election cycle, the Tarrance Group received “nearly $5 million in expenditures from Republican committees, PACs and congressional campaigns.”

The Tarrance Group’s single poll question about the ACP was posed to a narrow group (“500 Registered “likely” voters”) and used biased language. The question included the industry claim that “the pipeline would bring domestically produced natural gas to families and businesses in Virginia and North Carolina to meet energy and electricity needs” and included no opposition perspective. 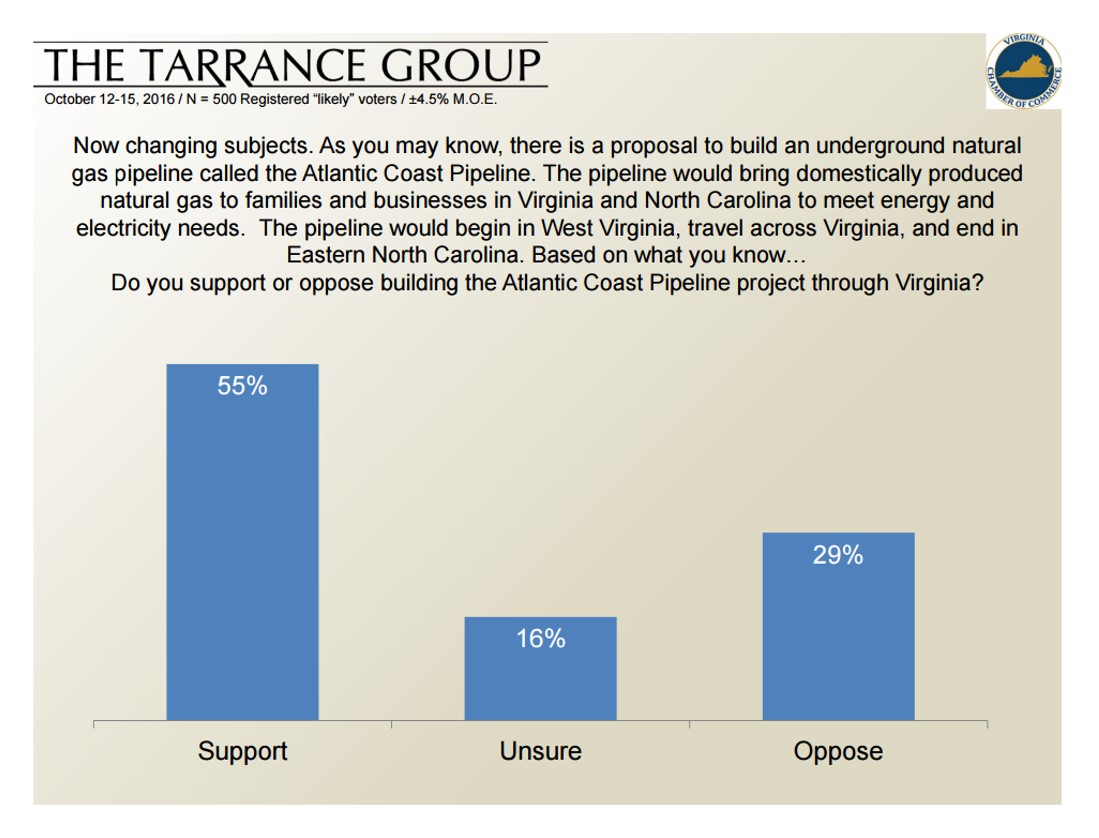 One wonders whether the poll results would’ve been favorable if the pro-pipeline claim was left out — or, for that matter, if an opposition claim was included.

But the problems with the poll don’t stop there.

Ed Goeas, the President and CEO of Tarrance Group, is a big GOP supporter. He was named “Republican Pollster of the Year” in both 2010 and 2014 by the American Association of Political Consultants.

Goeas is also a staunch supporter of Ed Gillespie, an ardent backer of the Atlantic Coast Pipeline. Gillespie is the former Republican National Committee chairman, and he ran an unsuccessful senatorial bid in 2014. Gillespie is now shooting to becoming Virginia’s next governor.

According to the Virginia Public Access Project, Goeas gave $500 to Let’s Grow Virginia, Gillespie’s political action committee, in October 2016, and he donated $1000 to Gillespie in 2014. Goeas and Gillespie appear to have also previously worked together for John Kasich.

That Goeas’ poll delivers a pro-ACP result based on a single loaded question is pretty convenient for Ed Gillespie — who also happens to have recently received over $43,000 from Dominion executives, lobbyists, and board members.

And the faulty poll isn’t the only piece of biased, paid-for PR that the ACP corporate backers have put out.

So who is Chmura Economics & Analytics?

Its client list contains numerous business groups and Virginia-based groups that have ties to Dominion, and the company has a history of releasing reports, often funded by the state of Virginia, that tout the policy goals of elected officials and are generally business friendly.

Moreover, Dominion CEO Tom Farrell and Dominion board member William P. Barr sit on the Governor’s Commission on Higher Education with Leslie Peterson, who is listed on the Commission’s website as Chmura’s Director of Operations.

The Southern Environmental Law Center and others have cited a report that strongly criticizes the results of the Chmura study. Among other things, they claim that the Chmura report is highly selective in its analysis — inflating its potential benefits and underplaying its potential costs and downsides — and that the study lacks “transparency and verifiable data necessary for independent review.”

Given that Dominion paid for the Tarrance poll and the Chmura report, that Tarrance has ties to pipeline supporters, and that Dominion leaders belong to the same networks as Chmura management, it’s probably no surprise that these entities issued pro-ACP material.

But with the controversy over the ACP raging on, the public deserves to hear the truth, independent of corporate money aimed at manipulating public opinion.

Public Accountability Initiative will release a full report on the power behind the Atlantic Coast Pipeline next week. The report will be the third installment of our Power Behind the Pipelines series.