Stephen Hadley is making the media rounds again. The former National Security Advisor to George W Bush served in the White House when Russia moved into parts of Georgia in 2008 and oversaw the administration’s response. In the past two days Hadley appeared on the Charlie Rose Show, and CNN’s Situation Room and Anderson Cooper 360, to provide commentary on the situation in Ukraine and proffer strategic advice based on his experiences in 2008. In each of those appearances Hadley was simply introduced as the former National Security Advisor.

The hosts failed to mention that Stephen Hadley stepped out of the White House in 2009 and went right to work for the defense industry as a director for Raytheon the same year. This fact, along with Hadley’s penchant for nondisclosure, made him the star of our report, “Conflicts of Interest in the Syria debate.”

Hadley’s audience was not informed that he serves as a director of Raytheon, the weapons manufacturer that makes the Tomahawk cruise missiles that were widely cited as a weapon of choice in a potential strike against Syria. Hadley earns $128,500 in annual cash compensation from the company and chairs its public affairs committee. He also owns 11,477 shares of Raytheon stock, which traded at all-time highs during the Syria debate ($77.65 on August 23, making Hadley’s share’s worth $891,189). Despite this financial stake, Hadley was presented to his audience as an experienced, independent national security expert.

In addition to his duties at Raytheon, Hadley is a principal at RiceHadleyGates, an international strategic consulting firm that advises business on foreign policy and national security challenges. Hadley’s colleagues include former Secretary of State, Condoleeza Rice, now also a director at Palantir Technologies, and former Secretary of Defense, Robert Gates, a former director at SAIC. 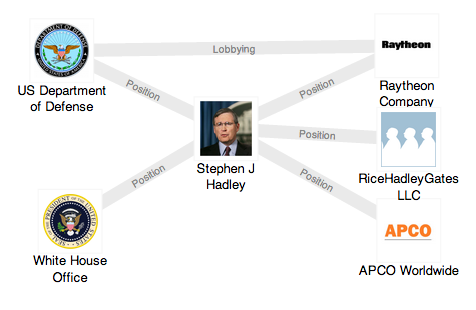 Although the general consensus has been that the United States would not intervene militarily in Ukraine, on the Situation Room with Wolf Blitzer, Hadley boasted of the White House’s strategy to deter Russia under his watch and suggested similar military tactics be employed to deter Russia now:

BLITZER: One thing I wonder, we talk a lot about how military options are off the table. But I wonder if I could ask you, Stephen Hadley, there are options in the military category on the table, though, still, aren’t there? For instance, Barbara referred to sending a U.S. ship into the Black Sea, previously scheduled exercises. Are there other things the U.S. can do in that category, short certainly of firing anything or putting boots on the ground?

HADLEY: I think there are. When we went through this in 2008 in Georgia, we also sent a ship into the Black Sea. We also actually delivered humanitarian assistance on the ground in Georgia through U.S. military C-130 aircraft. And we told the Russians we were doing it. We thought that was a useful signal.

BLITZER: It didn’t deter the Russians, though, from invading Georgia on your watch?

HADLEY: It did deter them from what their revised objective was, which was to go to Tbilisi and overturn the government.

BLITZER: So, what you’re saying, they stopped at a certain point.

Hadley floated these options again on The Charlie Rose Show:

CHARLIE ROSE: Steve, look back to Georgia, you and Nick both. What were the lessons of that and what would you do differently if you had it to do over?

STEPHEN HADLEY: I think that one of the things — the mistakes we made and it covered administrations, I think we moved very quickly. I think we had a very robust set of diplomatic actions. We made some implicit security threats as well. We flew humanitarian assistance into Georgia in military C-130 aircraft, letting the Russians know in advance we were doing it. We moved a ship or two into the Black Sea.

I think that aspect was pretty robust, and I think it prevented Russia from doing what it wanted to do, which was go to Tbilisi and overturn the government. I think where we failed was we talked about economic sanctions but we never really put them in place before we left office. I think economic sanctions have a big role to play in theUkraine and, second of all, I think the reset of Russia that came in 2009 was probably too soon.

So I think we probably did not do enough in the Bush administration, and I think it was not allowed in place long enough probably in the Obama administration, because the fact is our effort was to try to deter Putin from doing this again. And in fact, he now has just done it in Crimea.

Why is Hadley advocating a military strategy? Fortunately Hadley’s fixation on provoking Russia did not escape the attention of Hardball host Chris Matthews:

Listen to Bill Kristol, that old five-star general of the cold war. He says we need to, quote — catch this word — “humiliate Vladimir Putin, humiliate him, rub his face in it.” Stephen Hadley says he wants to put Ukraine in NATO. Great idea. Then we could fight the Russians ourselves, which NATO membership would require.

Are all these people crazy? Weren`t they thrilled like the rest of us when Mikhail Gorbachev decided to end the cold war? Don`t they brag about how Ronald Reagan did it, the part he played? And if so, why do they yearn to get things fired up again? Why do they positively pine for the fighting to get going?

Hadley’s title as a former National Security Advisor is well known and grants him copious platforms to comment on national security issues. Why not disclose his current ties? Is Hadley simply fulfilling his duties as chair of Raytheon’s Public Affairs Committee or drumming up business for RiceHadleyGates?

Update, 3/7: Monday The Washington Post ran an op-ed co-authored by Stephen Hadley and did not disclose his ties to RiceHadleyGates or Raytheon. This is significant given that Hadley wrote an op-ed for the newspaper during the Syria debates and that piece also ran without disclosure. When our report on Hadley’s ties was picked up by The Post, editorial page editor Fred Hiatt defended the lack of transparency in Hadley’s piece, a view that struck a chord with Glenn Greenwald:

Fred Hiatt has some very permissive & strange views on conflicts of interest – when it comes to defense contractors https://t.co/YjytAnW95o