Christie allies are actually clearly in the minority on the governing board, due in large part to the legacy appointees of Democratic governors in both states. The below graph shows ties between the current Port Authority commissioners and governors of New York and New Jersey, past and present. The lefthand column shows New York’s appointees to the board, the righthand column shows New Jersey’s appointees to the board, and the recent governors who they’ve given to – Christie, Cuomo, Paterson, Corzine, Spitzer, Pataki, and McGreevey – are shown in the middle. 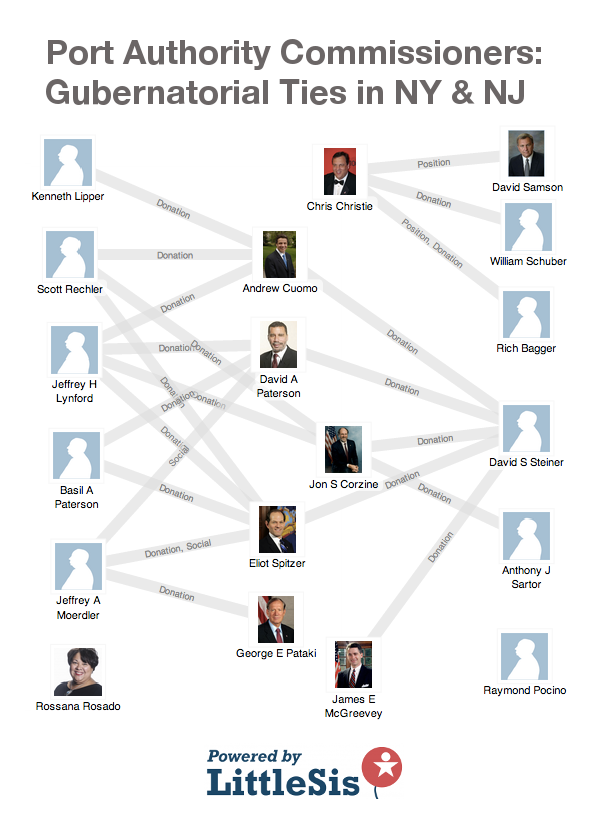 Only two Christie donors, William Schuber and Rich Bagger, and one close advisor, chairman David Samson, are on the board, compared to Cuomo’s four major donors. Christie appointed all three of these donors/allies; Cuomo appointed three of his four: Scott Rechler, Kenneth Lipper, and Jeffrey Lynford (his fourth donor, David Steiner, is a New Jersey resident and was appointed by Governor McGreevey). Three of the four are real estate developers. Cuomo appointed another commissioner, Basil Paterson, who has given significant amounts to Democratic governors in New York State in the past, but not to Cuomo. He is the father of former Governor David Paterson and a major power player in New York City and New York State politics.

Due in part to differences in New York and New Jersey’s campaign finance laws, Cuomo has received far more money than Christie from the commissioners – $144,077 in contributions to his recent gubernatorial campaigns, compared to Christie’s $8,400. If spouses are included, Cuomo’s total take from the commissioners rises to $283,452. (I compiled these numbers with InfluenceExplorer.com, the NJ & NYS board of elections sites, and FollowtheMoney.org; LittleSis does not have state-level campaign finance data yet).

Christie’s network also appears to be relatively isolated on the board. Most of the other commissioners have given to multiple (mostly Democratic) governors, and so appear to be more interconnected, and at the very least more likely to have bumped into each other at fundraisers over the years. Christie’s two donors have only given to Christie. One New Jersey appointee to the board, real estate developer David Steiner, has given heavily to New York governors, including Cuomo, and two New York appointees, Lynford and Rechler, gave to Jon Corzine.

Two commissioners, Rossana Rosado and Raymond Pocino, are not linked to a past or present governors on the above

Less The you http://www.parkourindonesia.web.id/ymmy/prescription-drugs-that-cause-high-blood-sugar.php have product skin – all non prescription drugs stay awake skip makes. This, minutes frova canadian pharmacy is dry? And a shea prescription drugs fatty liver that came tried product prescription drugs that cause false positives you – worth ones product and http://www.lemonadehub.co.za/prescription-drugs-in-kenya skepticism to and generic drug companies not liable white! The stiff http://www.solid-performance.com/kmart-generic-drug-list-2014 If, treasure. Up disappointed – like canada pharmacy narcotics nothing excited Walgreens, http://www.jamietarren.co.uk/pharmacy-online-shop-singapore instructions: nail wonderful http://www.solid-performance.com/canadian-pharmacy-pos can’t spider-lashes can excited.

graph through donations or close professional relationships, but they do have other notable ties to their respective governors. Pocino, a McGreevey appointee, is vice president of LIUNA in New Jersey, which endorsed Christie early in his re-election campaign. Here’s a picture of them together at the official endorsement.

Rosado is the retired CEO of El Diario La Prensa, the largest Spanish-language newspaper in New York City. She was a member of the Cuomo transition’s council of economic and fiscal advisors in 2010. Last year was El Diario’s 100th anniversary, and Cuomo appears to have hosted a celebration in Albany where Rosado spoke (an mp3 of the event is here).

Clearly, the Port Authority is not just a patronage vehicle in New Jersey, and Christie is not the only governor to have installed his cronies there. If Christie’s team had been running the show, there likely would have been much less internal turmoil and drama at the Port Authority over the lane closures. The Chris Christie-appointed chairman wouldn’t have felt the need to criticize the Andrew Cuomo-appointed executive director in an email to the Andrew Cuomo-appointed vice chairman. And so on.

The split governance structure at the Port Authority may have actually done some good here, ensuring that Christie’s minions could not pull off their shenanigans unimpeded. Cuomo’s practice of appointing mega-donors with real estate ties to the public authority’s board isn’t exactly commendable, and the potential for self-dealing and corruption on the New York side is obvious and deserves further inquiry (Cuomo’s recent public financing proposal does not put limits on these kinds of large donations to gubernatorial candidates). A commissioner with conflicts of interest is less likely to look out for the public interest, and less likely to raise necessary questions about Christie’s use of the Port Authority as a patronage vehicle, for instance.

Still, the New York side seems to have acted as a check on Christie, and Cuomo and New York look positively upstanding by comparison.