Private equity firm The Carlyle Group recently announced that it was bringing on former Federal Communications Commission chairman Julius Genachowski as a managing director and partner in its buyout group. As well-connected hires go, Carlyle couldn’t do much better than Genachowski; a friend and basketball buddy of Obama since his Harvard Law Review days, he led the Obama campaign’s 2008 internet fundraising strategy and became a campaign bundler. Now Genachowski is free to use his weighty influence to identify and gobble up tech, media, and telecommunications companies with Carlyle’s latest US buyout fund, valued at $13 billion.

The map below illustrates just a selection of Carlyle’s government-connected hires. 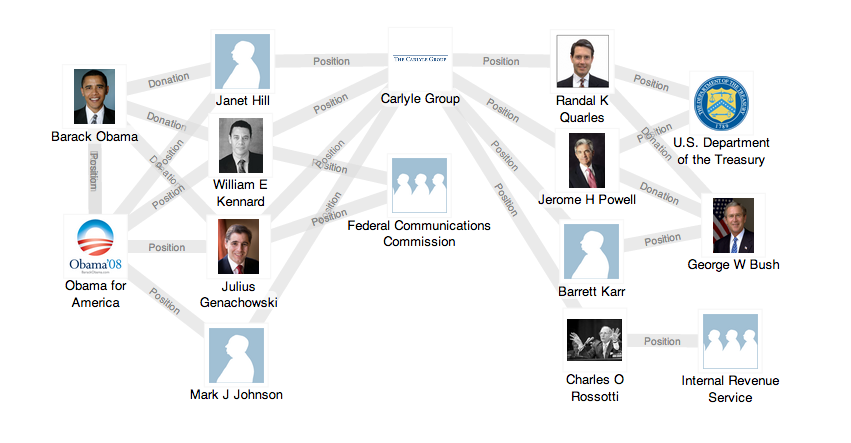 While Carlyle is well known as a revolving door firm, the Washington Post reported in 2008 that Carlyle was trying to shed its long-standing Washington insider image:

At one time, Carlyle was known for employing former politicians and government apparatchiks, making it an easy target for accusations — fair or not — that it was a crony capitalist machine buying favors, as opposed to a private equity firm with a knack for buying and selling companies at the right time.

In the past few years, Carlyle has taken steps to put this issue to rest.

It has in large measure stopped placing high-ranking politicians on the boards of its portfolio companies and further diversified its holdings and investments across a wide range of industries. It asked members of the bin Laden family to divest from the firm and took former President George Bush Senior and former British Prime Minister John Major off its payroll.

Interestingly, 2008 is the same year Carlyle took over ultra-connected shadow government firm Booz Allen Hamilton. After two years of sole ownership Carlyle took the contractor public but Booz Allen still represents nearly 15% of Carlyle’s stock portfolio with a market value of $1.77 billion. For its part, Booz maintains its influence with deep entrenchment in the federal intelligence community and a well-greased revolving door.

Perhaps Carlyle is looking for less obvious influence roster that mimics that of Booz Allen Hamilton. No more presidents or politicians, just their basketball buddies.