This fall, Blank Rome LLP, a Pennsylvania-based law and lobbying firm, held two events titled “Environmental Issues Affecting Midstream & Downstream Oil & Gas Development.” The events, one in Philadelphia and one in Harrisburg, were co-hosted by Hull & Associates, a shale oil and gas project management and consulting firm, and featured a slew of presenters from variety of industry affiliates, including Blank Rome energy chair (and former Pennsylvania DEP Secretary) Michael Krancer; Stephanie Catarino-Wissman, the executive director of the American Petroleum Institute‘s Pennsylvania office; and Chris Tucker, the leader of Energy in Depth, the Independent Petroleum Association of America’s public relations campaign.

While it is important for industries to be kept abreast of the issues regulators are looking at, the Blank Rome program, which included presentations on how midstream and downstream companies can mitigate public relations fallout from an environmental crisis, is another illustration of the cozy relationship in Pennsylvania between the oil and gas industry and the governmental bodies tasked with overseeing it.

Blank Rome, one of the program’s co-sponsors, is a law and lobbying firm headquartered in Philadelphia with offices nationwide. The firm has an energy, petrochemical, and natural resources practice, and describes itself as “strategically positioned to represent companies involved in the development and production of Marcellus Shale in the Commonwealth of Pennsylvania, as well as companies seeking to participate or obtain meaningful investments in these plays.” Blank Rome has lobbied for numerous oil and gas concerns both in Pennsylvania and at the federal level, including Shell, the Gas Processors Association, and pipeline services company GeoSpatial Holdings.

Blank Rome has employed numerous former Pennsylvania officials at the firm itself and at its subsidiary Blank Rome Government Relations, including Mark Holman, the chief of staff of former governor Tom Ridge, and Glen Thomas, another former Ridge aide who also the chairman of the state’s Public Utility Commission from 2001 to 2005.

Michael Krancer, Pennsylvania’s Secretary of Environmental Protection from January 2011 to April 2013, was a litigation partner at Blank Rome before he was appointed to public office and returned to the firm to head its natural resources practice as soon as he left office. From the materials on Blank Rome’s website, it appears that Krancer led the recent midstream and upstream events.

During his tenure at the Department of Environmental Protection, Krancer was criticized for policies that appeared to insert industry-friendly political interference into the regulatory process and for his assertion that “At the end of the day, my job is to get gas done.”

Just before leaving office, Krancer was the guest of honor at the 2012 Northeast Oil & Gas Awards, an industry event “[r]ecognizing the outstanding achievements made within the Upstream and Midstream sectors of the Oil & Gas Industry.” In his keynote address at the awards, embedded below, Krancer said:

We have got a world class play here, we’ve got world class players and we certainly have world class expectations, and I think they are being met in terms of environmental stewardship and responsibility right here in Pennsylvania.

In the event’s “yearbook,” Krancer called the Oil & Gas Awards “the best all around and most fun event I’ve been to since I’ve been Secretary.”

The guest of honor at this year’s Oil & Gas Awards is E Christopher Abruzzo, current Secretary of the Department of Environmental Protection. Abruzzo also gave the keynote address at the Harrisburg session of Blank Rome’s midstream and downstream event.

As can be seen in the below map, aside from Abruzzo and Robert F Powelson (the current chairman of the Pennsylvania Public Utility Commission and the keynote speaker at the program’s Philadelphia session), all of the event’s presenters are either affiliated with or aligned with the natural gas industry.

FTI Consulting is behind Energy in Depth, the Independent Petroleum Association of America campaign to build grassroots support for fracking. According to an internal IPAA memo, Energy in Depth was formed as an “online resource center to combat new environmental regulations.” The group also produced Truthland, an industry response to the documentary Gasland (which we wrote about here upon its release). Energy in Depth’s “team lead” is Blank Rome’s Philadelphia presenter Chris Tucker, and Harrisburg presenter Brian Kennedy has been identified as an Energy in Depth spokesman in the past.

It is a testament to the collegiality of the oil and gas industry with the agencies policing it that the leaders of a campaign to combat environmental regulations would speak side by side with the leaders of the state’s environmental and public utility regulators. Slides made available available on Blank Rome’s website show that Tucker’s presentation was on “Managing Perception in an Environmental or Safety Event.” He used FTI’s experience consulting for Transocean, owner of Deepwater Horizon, the oil rig that exploded in the Gulf of Mexico in 2010, as a case study for how gas companies ought to handle environmental disasters. 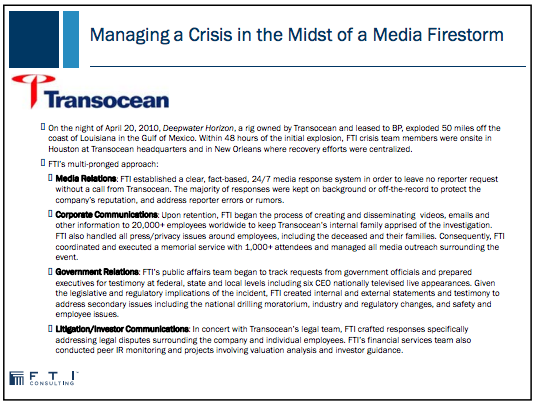 Much of the content at the Blank Rome event was surprisingly candid for an industry that presents a public face of safety and booming economics.

The presentation by Hugh F. Crowell, ecology and wetlands practice leader at Hull & Associates (an associate member of the Marcellus Shale Coalition), indicated that inadvertent releases of drilling mud into wetlands and streams was relatively commonplace, stressing that drillers prepare for inadvertent returns as an inevitability rather than on preventing them. Drilling mud is the mixture of chemicals and fluids used to facilitate drilling by reducing friction between the drill bit and the ground and can contain some of the same chemicals used in fracturing fluid. 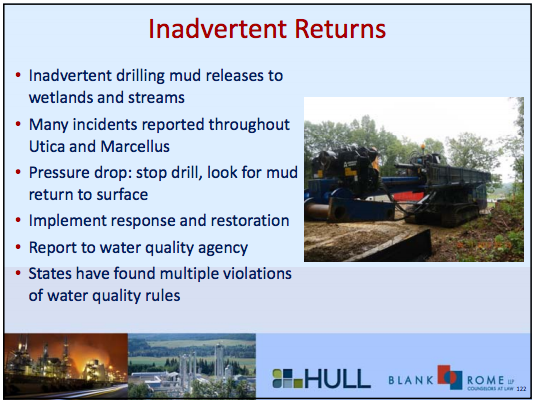 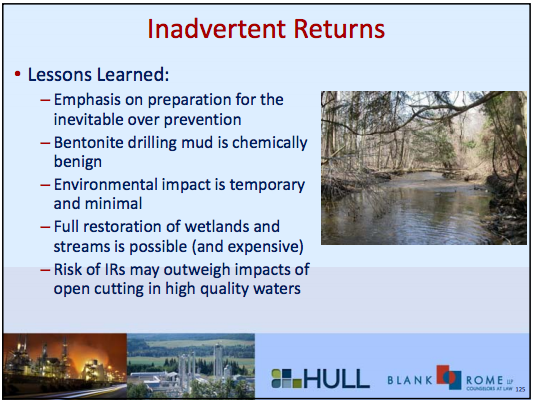 Another presentation at the event, by James Balaschak of the consulting giant Deloitte (also a Marcellus Shale Coalition member), focused on the economics of “the energy renaissance.” Balaschak raised several issues often downplayed by the oil and gas industry, noting the increasing capital intensity of the oil and gas industry due to the sharp decline rates of initially high-producing shale wells. 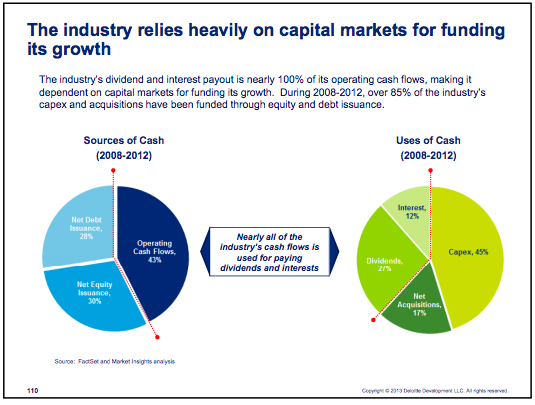 The slide shows that nearly all of the money being made by midstream companies is being paid out to shareholders or as interest on debt, necessitating even more debt to continue growth. Balaschak further indicated that midstream growth will likely flatten after 2019.

All of the slides for all of the presentations at Blank Rome & Hull’s Philadelphia event can be accessed on Blank Rome’s website here. 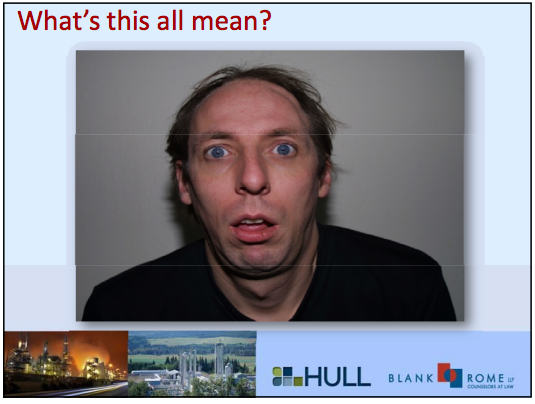 In addition to allowing a candid look at how members and affiliates of the oil and gas industry talk to one another about their business, this presentation also stands out as an example of how cozy Pennsylvania oil and gas regulators are with the industry that they police, being organized by a former Secretary of Environmental Protection and featuring a keynote address by his successor.

We’ve written extensively on this relationship between Pennsylvania government and the petroleum industry, including last February’s report “Fracking and the Revolving Door in Pennsylvania,” which details the public and private careers of nearly 50 Pennsylvania public officers who either left government to work for the oil and gas industry or vice versa.

Of course, all of the data from that report and from this blog post can be found on LittleSis, PAI’s network research tool that tracks who’s who at the heights of business and government.