There are plenty of predatory industries out there, but some have achieved extraordinary efficiencies in how they convert human misery to pure profit. The private prison industry is a good example. The abuses of private prison companies like Corrections Corp and the GEO Group have been well-documented, as have the skewed incentives that drive the industry: more prisoners means more demand for prison beds, which means more profit. Following from that, there is significant evidence that these companies buy influence and rig policy reforms in ways that send more people to private prisons.

Unlike some predatory industries, private prison companies also seem to have a fairly bad reputation, which is possibly why CCA puts things like this on the front page of its website: 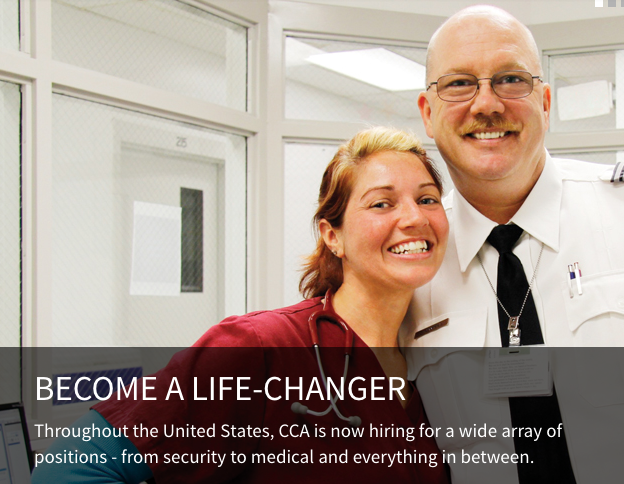 So it is interesting to see that private prison profiteers continue to be accepted in polite corners of society. The people behind these companies actually do venture across the moats surrounding their houses and build relationships with more mainstream elites, who join their boards, invest in their companies, and profit from the dirty work of the private prison CEOs, all the while retaining more generic and respected professional labels.

The CCA board, for instance, includes Thurgood Marshall, Jr, who is, as you might suspect, the son of the first African American Supreme Court Justice. Marshall, Jr. served in the Clinton administration and is now a partner at Bingham McCutchen, where he works as a lobbyist (occasionally, a registered one), advising clients on issues such as corporate governance, ethics compliance, and legislative and regulatory strategies. He has served on the board of CCA since 2002 and made $178,546 last year in this position. As a member of the nominating and governance committee, he is responsible for “review of the company’s ethics and compliance program.”

Marshall is a solid blue Democrat and has donated heavily to Senator Patrick Leahy, who has a great deal of influence over immigration reform as chair of the Judiciary committee. Marshall served as counsel to the Senate Judiciary under Ted Kennedy, and may have gotten to know Leahy in that role. He may have also gotten to know former Senator Dennis Deconcini, who was also a member of the Judiciary Committee when Marshall and Leahy were there, and who has served on CCA’s board since 2008. It does not take a great deal of imagination to see how these relationships might cover some bases for CCA in the immigration reform debate.

Marshall has also been on the board of the Ford Foundation since 2007. Ford’s stated goals are “to strengthen democratic values, reduce poverty and injustice, promote international cooperation and advance human achievement.” Marshall serves as chair of the audit committee, which is charged with assisting the board with “monitoring compliance with laws and regulations and the Trustee Code of Ethics,” and is a member of the board’s “Democracy, Rights, and Justice” committee.

As the director of a company that uses terms like “heads in beds,” “man-days,” and “operating margin per man-day” in its investor presentations, Marshall certainly has a unique perspective on “Democracy, Rights, and Justice.” 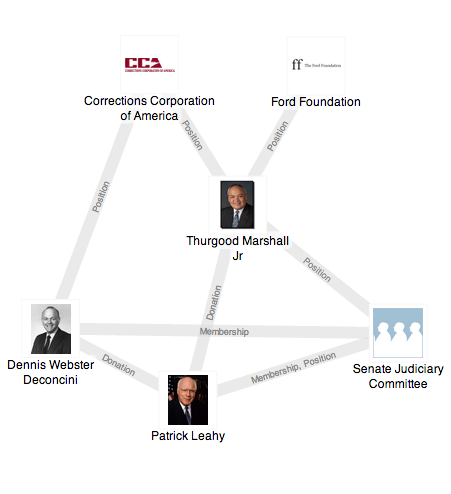 Marshall is not alone in bridging the worlds of private prison profiteering and social responsibility. Jeremy Mindich is managing director and co-founder of Scopia Capital, the second largest shareholder in Geo Group. Scopia owned nearly $200 million in Geo Group stock as of September 2013, and owned as much as $300 million in stock at one point. The current amount is 6% of Scopia’s portfolio, and is the third biggest investment listed in its 13-f filing.

As Vice reported in May, Mindich is a major Democratic donor and also serves as chair of the board of Root Capital, a nonprofit which invests in agricultural cooperatives. Root Capital describes itself as “a nonprofit social investment fund that grows rural prosperity in poor, environmentally vulnerable places in Africa and Latin America by lending capital, delivering financial training, and strengthening market connections for small and growing agricultural businesses.”

Mindich became chair of the board earlier this year, according to this tweet, which includes the hash tag #valuechains (a prison profiteering reference?) and a link to a piece Mindich wrote on a farming cooperative in Senegal.

Reflections from our new Board Chair Jeremy Mindich on supporting local #valuechains in #Senegal http://t.co/XdWnAEjggh #foodsecurity

According to this Facebook post, Mindich offered words of support to the Root Capital staff in the wake of the Boston Marathon bombing in April and also quoted Martin Luther King, Jr: “Darkness cannot drive out darkness; only light can do that. Hate cannot drive out hate; only love can do that.”

Root Capital, with its commitment to social responsibility, probably could not stomach elevating a private prison company CEO to the post of board chairman. But Mindich is merely a hedge fund manager making massive investments in private prisons, with no direct oversight of the profit margins generated by “man-days” and “heads in beds.” And so he passes the smell test with Root Capital, and can quote Martin Luther King and extoll the virtues of agricultural cooperatives in Senegal without raising eyebrows, and perhaps even get some cover for the less socially-responsible things he does with the money he manages.

Hey, you have to make money somehow, right?

Update: GEO is actually the 3rd biggest holding in Scopia’s portfolio — I originally had it as 2nd. It was its largest holding as recently as December 2012.