Last week the Buffalo Niagara Partnership announced its 2014 policy agenda for the Western New York region, with support for liquefied natural gas (LNG) fueling stations as a top priority. Currently, New York environmental law does not allow LNG facilities in residential areas or “in dangerous proximity to contiguous populations.” Bills now under consideration in the state legislature would change this, exempting LNG storage and transportation facilities with a capacity less than 40,000 gallons from the siting law and allowing LNG stations to be constructed outside of any city with a population of 1 million or more (i.e. outside New York City).

Using natural gas as automobile fuel would be a boon to a natural gas industry that is struggling to turn a profit on the glut of gas produced in the fracking age. In addition to LNG for automobiles, gas producers are promoting compressed natural gas (CNG) as vehicular fuel as well as LNG exports to increase demand for their product.

As we have pointed out before, BNP is a powerful business lobby in the region with strong ties to both the natural gas industry and New York State government. To push its LNG plans, BNP has co-founded a coalition called LNG for NY.

LNG for NY describes itself as “a group devoted to curbing our reliance on diesel fuel by enabling New Yorkers to use liquefied natural gas to fuel their vehicles” and plays up environmental gains it says will be made by allowing LNG as auto fuel. However, a look at the coalition’s membership turns up many of the same names that have been pushing for expanded natural gas operations in New York State, most of which are connected to the pro-fracking business lobby Unshackle Upstate, profiled in an earlier Eyes on the Ties post. The Buffalo Niagara Partnership created both Unshackle Upstate and LNG for NY. Also, LNG for NY members the North Country Chamber of Commerce and the Greater Binghamton Chamber of Commerce are both represented on Unshackle Upstate’s board.

Unlisted among the coalition’s members is Hebeler, a Western New York corporation and BNP member that produces LNG products and has a patent pending on a design for an LNG fuel tank for trucks. A ‘whois’ search LNG for NY’s domain name reveals that a Hebeler employee is the registrant and administrator of the site: 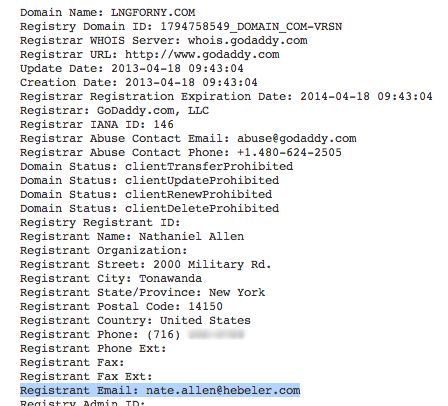 Though it dresses up LNG as an environmental issue, LNG for NY appears to be a Buffalo Niagara Partnership/Unshackle Upstate front to expand natural gas operations in New York State on behalf of their gas industry constituents.