The shutdown prompted some interesting analyses of the ascendant right-wing fringe. Tom Lind, Doug Henwood, and Bill Black have all weighed in with takes on the country’s bizarre political dynamic, and certainly there is more to come.

One way to gain some more insight into what’s going on: follow the money and look at where some of the key players behind the shutdown get their funding. Many members of Congress who forced the shutdown were part of the “suicide caucus,” the group of 80 House Republicans who signed a letter urging John Boehner to play the government shutdown card in the battle against Obamacare. Conservative commentator Charles Krauthammer coined the term, and a Ryan Lizza piece in the New Yorker expanded on it (“Where the GOP’s suicide caucus lives”), noting that many conservative elites, such as Krauthammer and Karl Rove, opposed the tactic.

The question of who funds the suicide caucus is especially interesting in light of reports that corporate America has less leverage over the group than it typically has over members of Congress. Big business interests, led by groups like the US Chamber, opposed the shutdown – it was not good for business, and Obamacare is not all that bad for business.

LittleSis data offers some interesting windows onto the donor networks behind the Suicide Caucus, and also some opportunities to investigate them further. This is facilitated in large part by money and politics data on LittleSis, which is imported from OpenSecrets using our recently-improved donation matching tool. 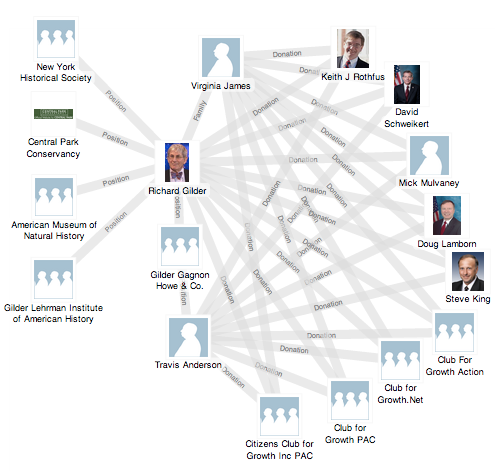 First, a list of signatories to the letter written by Mark Meadows can be found here. The funding tab shows which donors profiled in the LittleSis database have given to the most signatories, sorted by number of recipients, descending (LittleSis editor WileECoyote also conveniently created a list of these donors). While some top donors are not profiled in LittleSis’s database, simply because they haven’t been added yet, I did do a rough query of OpenSecrets raw data for the fifty donors who have given to the most signatories in recent years, and these individuals’ federal political contributions were then imported using our donation matching tool.

Notably, about two-thirds of these 50 or so top donors are also donors to the Club for Growth and its various affiliated PACs. The remaining third are mostly Washington, DC-based lobbyists who are prolific Republican Party donors – these lobbyists give to Club for Growth-aligned politicians like those that signed the Meadows letter, but never give to the Club for Growth itself. There are only a handful of exceptions.

Many of the top donors to the Meadows letter signers appear to be relatively obscure names — not, for instance, top executives at multinational corporations. Allen Simon, a retired Intel engineer in Chandler, Arizona, is a major donor to the list, giving over $100,000 to 20 recipients. Simon holds several patents: two related to video decoding, and one related to video teleconferencing (in at least one case, Intel has called on the federal government to enforce these intellectual property rights). Simon, like other top donors to the suicide caucus, doesn’t seem to have discovered mega-giving until the mid-2000s, and his contributions have exploded since then.

Another, Paul Reid, is the CEO of Reid Petroleum in Lockport, NY, which operates gas stations and convenience stores. Reid served as president of the Society of Independent Gasoline Marketers of America (SIGMA) from 2006 to 2008. He has given nearly $50,000 to SIGMA’s PAC over the years, but, like Simon, his giving to political candidates has taken off in the past ten years. He cuts a relatively low profile in the Buffalo area (where I live): he appears to be unaffiliated with the regional chamber of commerce, though he does serve on the board of Artpark, an outdoor music and art venue on the Niagara gorge. Paul Quebral, an executive at Reid Petroleum, used to serve as chairman of the board of the Amherst Industrial Development Agency, a state development agency which does out tax breaks to local corporations, in some cases to help them move their headquarters from the city to the suburbs.

Other top donors are more plugged in to national power networks. Sheldon Rose and Leslie Rose (brothers) are partners at Edward Rose & Sons, a real estate development firm based in Michigan. They seem to have run into some government red tape along the way (see “Repulsing Rapacious Government”). Leslie Rose rubs shoulders with more exclusive segments of the power elite as a board member of the Palm Beach Civic Association, where New York City-based billionaires like David Koch, Leonard Lauder, and Henry Kravis also have seats.

Another top donor, Travis Anderson, lives in New Jersey and is managing partner at Gilder, Gagnon & Howe, an investment firm. Anderson has given to 20 signatories to the Meadows letter. That firm was founded by Richard Gilder, a founder of the Club for Growth, himself a donor to many Meadows signers. Gilder’s ex-wife, Virginia James (formerly Manheimer, formerly Gilder), is New Jersey-based, and also shows up on the list of major donors to the signers. All three have given large contributions to Club for Growth PACs, though James has gone above and beyond, as one of a handful of donors who has given more than $1 million to its super PAC since 2011.

Like David Koch, Gilder has close connections to prominent New York cultural institutions, including the Central Park Conservancy, the American Museum of Natural History, and the New York Historical Society (he is on the board of each, and is chair emeritus of the New York Historical Society). And like Koch, his extremism does not seem to pose a significant threat to his social cache in the city. Money certainly helps. Gilder teamed with George Soros to pay for the restoration of Central Park’s lawn, for instance.

So the donor networks behind the suicide caucus are not as peripheral as they may seem at first glance – there is some overlap with the core of the country’s corporate elite. This raises an interesting question: at what point will the extremism of the Gilders and Kochs and other well-capitalized backers of the right-wing fringe make them too toxic for power circles in New York City and elsewhere? Shouldn’t there be a tipping point, and if so, when will they reach it? And does it matter — does the Tea Party need these backers at this point?

Though the Gilders and Kochs are particularly out there, it also seems that the anti-safety net language they are speaking is not all that alien to the corporate elite’s center – represented by Pete Peterson, Fix the Debt, the Business Roundtable. With default just days away, Fix the Debt issued a statement calling on Congress and the President to shoehorn long term budgetary measures (code for Medicare and Social Security cuts) into the final deal. It does not read like a rational appraisal of the situation, and yet Fix the Debt is as representative of the corporate elite as any institution in the land. Perhaps the shutdown is a sign that the American elite is losing control of its mechanisms of power, as Henwood puts it. It also appears that it has drunk too much of its own kool-aid, and has lost control of its capacity for rational action in situations like these.