Last week hundreds of people gathered in Arizona to protest record-high levels of deportations from the US this year.  Activists shut down Operation Streamline by chaining themselves to buses carrying detainees and to the Eloy Detention Center entrance, where detainees are held.  Operation Streamline is a federal Immigration and Customs Enforcement (ICE) policy that requires undocumented immigrants to be arrested and then deported.

The activists are demanding action from President Obama, who has executive power to stop deportations, and Congress. Comprehensive immigration reform was assembled by the bipartisan Gang of 8 and passed in the Senate but has stalled in the House. Obama said Tuesday that immigration is his top priority after the shutdown is resolved.

ICE contracts with Corrections Corporation of America to run Eloy in Arizona.  According to CCA’s 2012 Annual Report, the company earned $752 million from its federal government contracts (including ICE, the Bureau of Prisons and the US Marshals Service) that year, constituting 43% of its total income.

CCA stands to gain or lose significantly from national immigration reform and it is attempting to influence the process in the usual corporate way, by spending millions on lobbyists and campaign contributions.  Earlier this year, The Nation conducted an excellent investigation into the cash passed between CCA and the Gang of 8.

CCA acted similarly a few years ago in Arizona to influence the state’s controversial SB-1070, a harsh enforcement law that would likely create more detainees in need of a bed at Eloy.  In 2008, former Arizona Senator Dennis DeConcini joined CCA’s Board of Directors, while former Arizona legislative staffer John Malloy was brought on to support former Arizona legislative staffer Brad Regens with “partnership relations” at CCA.  The law was signed in 2010 by Governor Jan Brewer, who had a couple of staffers take the revolving door out of her office and into lobbying firms hired by CCA.

I put all of that analysis together on LittleSis and found a tangled web of political and family connections that stretch from Phoenix to DC.  It seems that CCA has hired lobbyists in Arizona and gained influence in Washington at the same time – a 2-for-1 special! 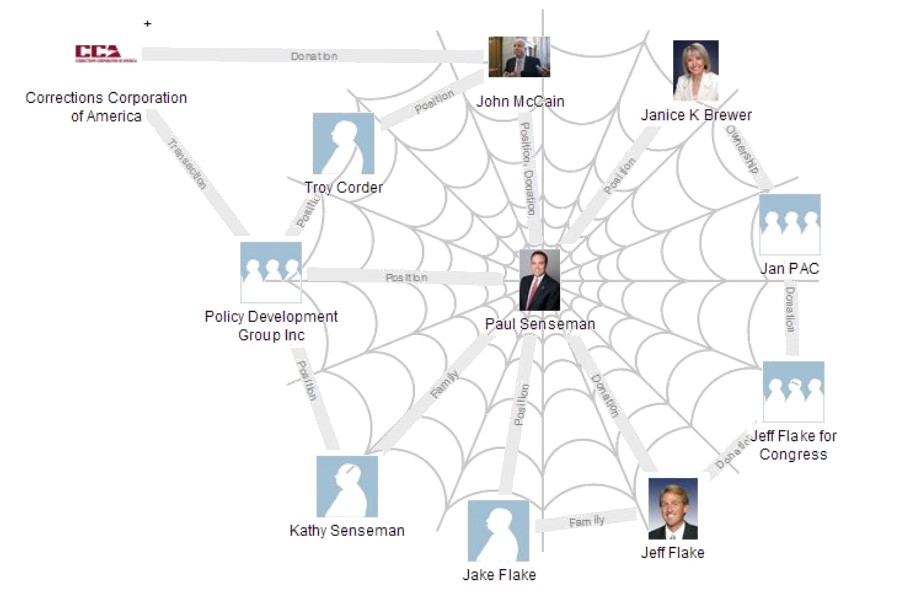 At the center of CCA’s web is Paul Senseman, who’s passed through the revolving door between government and lobbying three times.  He began his career in the office of Senator John McCain, a prominent Gang of 8 member.  McCain has been a vocal supporter of expanding Operation Streamline in reforming immigration.  Senseman later served as Chief of Staff to the late Arizona State Senator Jake Flake whose nephew is Senator Jeff Flake,* another Gang of 8 member.  In 2003, Senseman joined the Policy Development Group and lobbied on behalf of CCA within Arizona.  He left the firm in 2009 to join Governor Brewer’s office as Deputy Chief of Staff for Communications, but his wife, Kathy Senseman, was hired on to continue lobbying for CCA.

Senseman left Brewer’s office in 2011 and returned to his post at the Policy Development Group, where he and his wife both currently lobby for CCA.  Senseman retained a role with Brewer as her PAC spokesman, however.  The governor’s Jan PAC spent $100,000 on a mailer supporting Senator Jeff Flake in October 2012 and Senseman explained why: “She is very fond of Congressman Flake (and) believes his record and his approach to problem solving is exactly what we need in Washington, D.C.”

Other lobbyists for CCA at the Policy Development Group also arrived through the revolving door from the offices of US Senators.  Troy Corder worked for Senator McCain.  Andy Jacobs and Todd Baughman both worked for former Senator John Kyl, who retired at the end of his third term in 2013.

CCA has often insisted that it does not lobby on immigration law even though its business model is largely predicated on the continued detention of undocumented people.  I can think of one way to influence influence immigration reform without explicitly “lobbying”: hire a few state-level lobbyists with connections to two of the most prominent Senators in the debate.  Maybe they’ll put in a good word.

*Fascinatingly, both Jake and Jeff Flake were born in an Arizona town called “Snowflake.”