In the wake of a report from ProPublica that the New York Fed fired a senior bank examiner for challenging inadequacies in Goldman Sachs’ management of conflict of interests, I thought it would be interesting to take a look at the daily schedules of the New York Fed’s president, William Dudley, a Goldman alum.

Dudley spent two decades at Goldman Sachs before joining the New York Fed, so he was steeped in the ways of the bank, which apparently include a systematic, almost absurd disregard for conflict of interest monitoring and management. According to the ProPublica article, Goldman has no firm-wide conflict of interest policy. One Goldman unit instructs employees not to write down their conflicts. The bank’s conflict of interest unit is the same as its business selection unit, a bizarre structure that almost seems designed to encourage conflicts. The head of this unit does not see it as serving any compliance function. Carmen Segarra, the bank examiner who was fired, suggested that Goldman executives could not even demonstrate a basic understanding of what a conflict of interest is.

Was the New York Federal Reserve conflict of interest training enough to help Dudley overcome years of learning the Goldman way? Had he really avoided any awareness or involvement in the Segarra situation? These are hard questions to answer, and answers are unlikely to surface in any documents (the Goldman way: don’t write it down). A New York Fed spokesperson told ProPublica that Dudley was not involved in firing Segarra. But Dudley’s calendar might reveal that he had had meetings with Goldman executives during the whole saga, which would be interesting and would probably look bad for Dudley (though it would not be proof of his involvement).

When Dudley’s daily schedules were first released, covering 2009 and 2010, they revealed many meetings with Goldman executives. Here’s a meeting with CEO Lloyd Blankfein and CFO David Viniar in December 2009, for instance:

The names of Goldman and other big banks appear frequently in his schedules in 2009 and 2010. But by 2012, when Segarra was fired, Goldman, as well as Citigroup, JPMorgan, and Morgan Stanley, hardly show up at all. Here’s a graph of the number of mentions of the four big banks in his daily logs, 2009 to 2013 (some duplicate mentions have been removed so as to give a better sense of how often Dudley dealt with the banks): 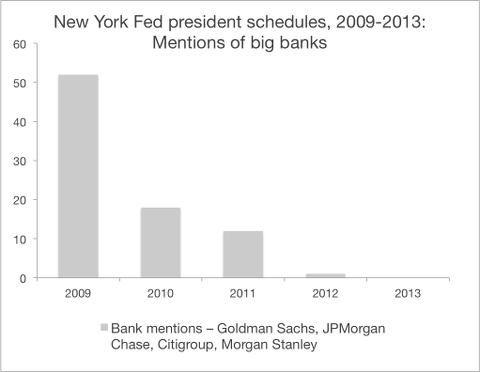 So, what happened? Did Dudley stop having breakfast meetings with Lloyd Blankfein in 2012 and 2013? Were no meetings necessary after the financial crisis passed?

Unlikely. A closer look at the logs suggests that the New York Fed changed its record-keeping procedures some time in 2011, deciding that Dudley’s daily schedule, already a fairly limited tool for figuring out what the New York Fed president is up to, was too transparent. Some time in 2011, redactions start showing up in the logs, with the explanation “supervisory matter” or “supervised institution.” The redactions likely cover the names of the banks and their executives. Here is an example, from April 19, 2012:

In some cases, the redactions obscure the details of meetings that would not seem to involve serious deliberations. This breakfast meeting from June 5, 2012, for instance:

The below graph shows the number of times these redactions appeared in Dudley’s daily logs from 2009 to 2013, alongside the number mentions of the four big banks under the New York Fed’s supervision. There is an almost perfect correspondence in the numbers — as the big banks disappeared from the logs, the redactions appeared with greater frequency (note that 2013 data is available only through June): 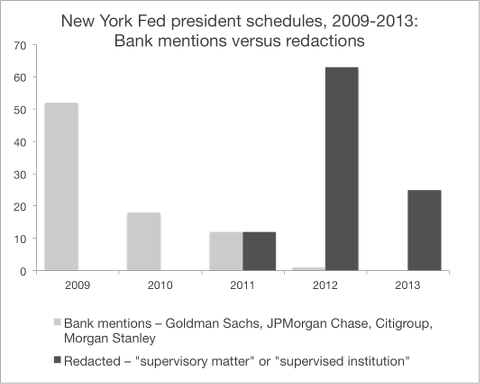 Was Dudley breaking bread with his former colleagues at Goldman as Segarra pushed her superiors to take enforcement action against the bank? Unfortunately, we can’t tell from the logs. Somewhere along the way, it became a “supervisory matter.”