In recent interviews, Dr. Bruce Pitman, the dean of the University at Buffalo’s College of Arts and Sciences responded to PAI’s criticism of a study published this summer by the school’s Shale Resources and Society Institute. To a WBFO reporter, Pitman characterized claims of SRSI’s poor scholarship as “nonsense”, saying, “We haven’t been able to get past the noise on the extremes in order to actually begin to talk about what’s sensible and serious here.”

“PAI took data from the very report turned it around and said, ‘Oh if you do the calculations this way something else happens.’ So was the report honest and open and did it disclose all the facts and define all its terms? I think it did. People choosing to interpret things differently – absolutely fair enough – but you can’t discredit the report if it’s providing you the data you’re choosing to look at differently.”

Here, Pitman was responding to this quote from a PAI researcher interviewed for the article:

“The biggest thing is that two of the main claims of the UB report were just flat out wrong,” Galbraith said. “When it comes down to it, they made a claim that is totally unsupported by their data. Their data doesn’t say what they say it says.”

The claim at question, found on page iii of the SRSI study, is:

The authors of the SRSI study calculate the odds of environmental events by dividing the number of polluting events in a given year by the number of wells drilled that year, as can be seen in the graph below, excerpted from page 14 of the study. 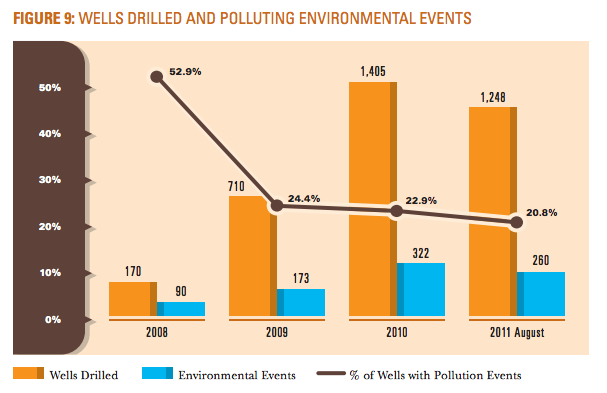 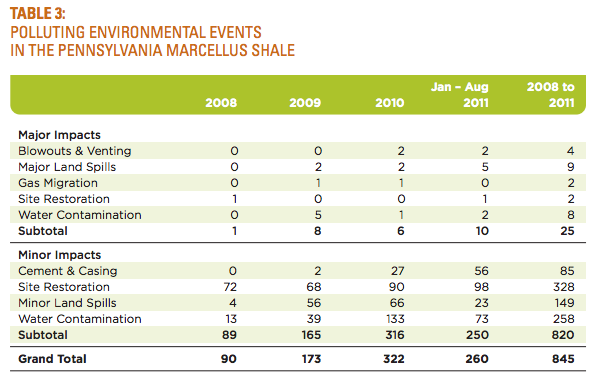 While the odds of combined major and minor polluting events may have decreased in the time period studied (though even this claim is suspect due to the way the Pennsylvania DEP and the authors classified “environmental” compared to “administrative” violations), using the researchers’ own calculus we see that the odds of major polluting events increased:

Again, the conclusion reached by the SRSI researchers and so zealously defended by Dr. Pitman is:

It doesn’t take an advanced degree in mathematics, which Dr. Pitman has, to see that 8 major polluting events per 1000 wells is more than 5 major polluting events per 1000 wells. The claim that 8 is less than 5 is not open to interpretation as Dr. Pitman suggested in the Spectrum; it is an instance of the SRSI report’s authors either misreading or misrepresenting their data.

Update (September 4, 2012, 11:27 am): The full Public Accountability Initiative report on the SRSI study, “The UB Shale Play: Distorting the Facts About Fracking”, can be accessed here.