Truthland, a 35-minute compilation of interviews with fracking proponents, is being promoted by the oil and natural gas industry’s PR arm, Energy In Depth, as an answer to the 2010 anti-fracking film Gasland. The advertising campaign for Truthland emphasizes that it documents the concerns of “a Susquehanna County mom, dairy farmer and teacher” who is “the real deal,” as opposed to Josh Fox, the writer and director of Gasland and “a spoiled avant-garde showman from New York City,” in the words of EID’s Northeast Marcellus campaign director, Tom Shepstone.

While the new film’s protagonist, Shelly DePue, is indeed a farmer from rural Pennsylvania, the notion that Truthland is a depiction of her independently-planned road trip around the United States to “find out just what the truth was” became less and less believable the more we examined it. Rather, the film and its “full-scale website and social media campaign” was planned from start to finish by the natural gas industry. Even its web domain, truthlandmovie.com, was registered by industry giant Chesapeake Energy: 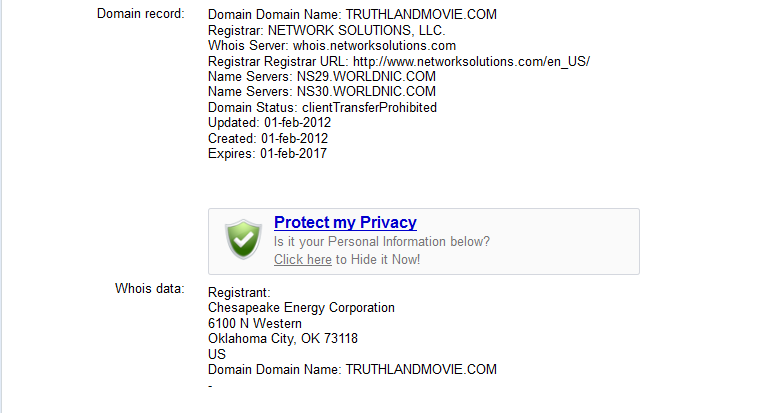 (Apparently, this instance of funding transparency was not intentional – on June 12, the Whois listing for the Truthland domain was updated to remove “Chesapeake Energy Corporation” and replace it with “MFL Holdings, ATTN TRUTHLANDMOVIE.COM, care of Network Solutions.” Our cached version of the Chesapeake registration, above, is from June 8.)

The origin of Truthland as an industry PR campaign is confirmed by EID spokesman Chris Tucker’s presentation to a meeting of West Virginia oil and natural gas industry representatives in May. EID operates as an “astroturf” organization that keeps its substantial gas industry backing and orchestration hidden behind the names and faces of “locals” and “natives,” but in this case, they failed to sufficiently hide the degree to which its “authentic” Gasland response was planned at the highest level.

The EID planning document also reveals that Truthland was produced by Fred Davis, a prominent political ad maker who has filmed TV spots for George W. Bush and John McCain and was the leading strategist behind an inflammatory advertising campaign (“The Defeat of Barack Hussein Obama”) prepared for the 2012 general election that attracted so much negative attention that Mitt Romney publicly distanced himself from its makers. 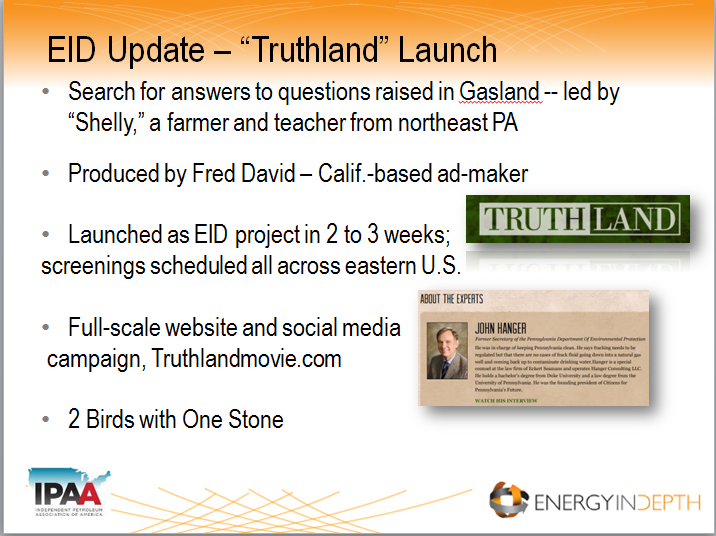 After first appearing on YouTube in the first week of June, Truthland was quickly withdrawn from the website when it began to pick up hits, alarming supportive viewers. On a natural gas-leasing web forum, a member claiming to represent the Joint Landowners Coalition of New York wrote that the film’s unveiling was the responsibility of “Susan Oliver a ‘communications consultant’ who lives in DC but has acreage in Bainbridge [in Chenango County, NY].” Like many professionals working for the natural gas industry, Oliver tries to keep her work in the PR industry (“Persuasive media relations pro intensely committed to victory”) hidden when it’s more useful to appear to be simply a “NY Marcellus Shale landowner”:

To deride Gasland‘s Fox for his residency in New York City, as Truthland and its media campaign do repeatedly, seems hypocritical when the supposedly more “authentic” film was made by a high-profile ad firm based in Hollywood, CA and promoted by a Washington, DC media relations expert.

Unfortunately, the environmental and health concerns about fracking that Truthland‘s protagonist, Shelly Depue, determined to be “unfounded” after her trip have become a reality on her own property. In March, after a DePue neighbor outside Montrose, PA reported sludgy water and an “erupting” water well that was also determined to have unusually high methane levels, the Scranton Times-Tribune investigated and found that Tulsa, OK-based drilling company WPX Energy had been cited for environmental violations on multiple nearby wells in 2011, including on the Depues’ property, which they had leased to WPX (then Williams Production Appalachia) in July 2010. The violations were for “defective casing or cement … meant to protect aquifers [which contain drinking water] from gas and other fluids.”

An excerpt from Truthland shows Shelly examining a well casing on-site with a former Pennsylvania DEP employee, who describes its safety features: “Multiple layers of protection … You can see nothing’s going to get in or out of this pipe.” Yet this is exactly what occurred. WPX’s improperly cased wells on the Depue property are now being cited in a lawsuit brought by the neighbors affected, who are currently receiving drinking water from the gas drillers. It’s not known whether the Depues’ water has been harmed by the casing leaks.

Energy In Depth has not exactly been forthcoming with the real story of the making of Truthland, but neither did they go to extraordinary lengths to hide the information contained in this blog post. No leaked documents were needed, just those publicly available to anyone with an Internet connection and a few hours to set aside for research. There was the attempt to scrub Chesapeake’s name from the film’s web domain, but considering that it had been visible for months before disappearing on the day of the film’s release, that looks to have been an afterthought.

EID’s Shepstone blasts the “sheer arrogance” of the makers of Gasland, but Truthland makes the drilling industry and its PR machine look very arrogant indeed. They appear to believe that rural landowners in Pennsylvania, New York and Ohio will accept the conclusions offered to them by what is essentially a fracking infomercial without taking a close look at the companies that funded it and carefully tailored its contents to suit their message. Their strategy for obtaining gas leasing rights from landowners includes consulting military counterinsurgency and psychological operations experts, but if they think the friendly visage of Truthland‘s star is enough to distract viewers from the real issues at stake, they have severely underestimated the intelligence of their target audience.