The report found that 50% of the six big banks’ foreign subsidiaries are located in tax haven jurisdictions. 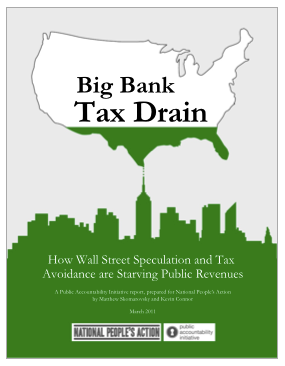 Goldman Sachs has far fewer foreign subsidiaries, but of those, 75% are located in tax haven countries. Its two favorite tax havens are the Cayman Islands with 17 and Mauritius with 9.

The report found that all of this helped the six banks avoid $13 billion in taxes over the past two years, shortly after US taxpayers bailed them out to the tune of hundreds of billions. That’s enough to pay for all the teacher jobs lost in the course of the crisis – twice.

Bank of America recorded a $666 million tax refund for 2010, which we deemed the “tax refund from hell.” Bank of America booked a paper loss in 2010, but only because of a non-deductible $12 billion writedown called a “goodwill impairment charge.” Essentially, it wrote down the value of its credit card brand. Without the writedown, Bank of America would have booked positive pre-tax earnings in 2010 of over $10 billion. Depending on how the loss was split between its US and foreign businesses, it seems likely that Bank of America should have paid $1-2 billion in US taxes. Instead, it got a refund.

It may help that Bank of America director Charles O. Rossotti is a former IRS commissioner.

Perhaps more egregiously, Wells Fargo is paying a federal income tax rate of -6.8% for the bailout years of 2009 and 2010, despite booking pre-tax earnings of $37 billion. In other words, Wells Fargo recorded tax refunds of $2.5 billion in those years, despite being immensely profitable.

For your tax day perusal, here are two tables from the report with tax haven information, each based on our analysis of exhibit 21s from the bank’s SEC 2010 10-k filings (annual reports). The full report is here.