Last month, as the financial reform process appeared to be going poorly for the banks, Wall Street lobbyists told the Washington Post that they would be looking to Barney Frank for leadership in working out a reform compromise that pleased the banks. While the populists shook their fists, grown-ups like Frank would figure out how to capitulate to Wall Street behind closed doors.

Frank’s moment has finally come. The Huffington Post’s Ryan Grim is reporting that the Congressman from Massachusetts is going to bat for big banks by pushing compromise language on derivatives that will gut the tough reforms sought by Senator Blanche Lincoln.

Unfortunately, despite his progressive record on other issues, Frank’s capitulation to Wall Street on this issue is not surprising. As I’ve written before, Frank has spent the past ten years cultivating an exceptional Wall Street donor base. The numbers, drawn from OpenSecrets.org data, are remarkable:

* Frank raised 56% of his campaign contributions from FIRE (Finance, Insurance, and Real Estate — a rough approximation for Wall Street) during the 2008 cycle, a greater share than all but two members of Congress (Bachus and Kanjorski).

* Frank raised more money from FIRE than any other Democratic member of the House in 2006 (with the exceptions of Ben Cardin and Harold Ford, who were both running for Senate) and all but a few Republicans.

* When Frank became the ranking minority member on the House Financial Services Committee in 2002, his fundraising totals rose five-fold, from $268,000 the previous cycle to $1.4 million.

This graph shows the top 50 “Wall Street captives” in Congress — Representatives and Senators who receive the most FIRE money as a share of their receipts in 2010. Frank is #8, in orange (he was #3 out of 535 for the 2008 cycle). 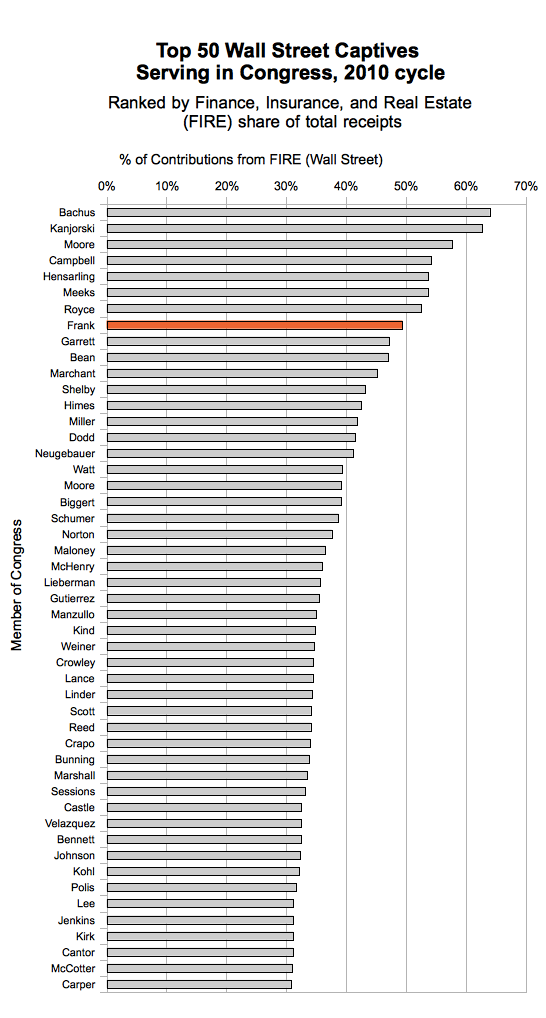 Barney Frank got a lot of credit two months ago for rebuking a former staffer who became a Wall Street lobbyist. He also instructed his staff not to communicate with Michael Paese, another staffer turned lobbyist. But against the backdrop of these fundraising numbers, such gestures appear largely symbolic. You can’t take this kind of money from a class of donors without being on the phone with them all the time. And when issues like the derivatives compromise arise, it’s not hard to predict where Frank, Meeks, and other Wall Street-captured members of Congress will come down.