In 2008, economist Nouriel Roubini popularized the term “shadow banking system” to describe the non-bank financial institutions that eventually helped spur the collapse of the financial system: highly-leveraged hedge funds, investment banks, and the like. This shadow system fueled Wall Street profits for years before eventually necessitating massive bailouts of the financial sector.

These days, a “shadow bank lobby,” has played a prominent role in shaping the financial reform process, pushing amendments that will weaken consumer protections, water down regulation of the Wall Street casino, and increase the likelihood of continuing fraud and future bailouts. I discuss this “shadow bank lobby” in Big Bank Takeover, the report on the big banks’ army of lobbyists released yesterday by the Campaign for America’s Future.

Two of the principal players in the shadow bank lobby are large business associations: the US Chamber of Commerce and the Business Roundtable. As Big Bank Takeover details, each institution has morphed into an aggressive financial industry lobby over the bailout period of the past two years. During the bailout period of the past two years, as Wall Street influence has come to be seen as toxic, big banks appear to have directed significant portions of their political budget to these institutions, rather than hiring more lobbyists to lobby directly on their behalf.

Last year, the Chamber, the Business Roundtable, and several other groups partnered to set up the Coalition for Derivatives End Users. The group is supposed to be representing businesses that use derivatives to hedge against risk. But yesterday, a hedge fund manager working with Americans for Financial Reform called on businesses to leave the “sham coalition,” which he said was a creation of the big banks:

“Today, there is no legitimate reason that non-financial businesses should be lobbying to weaken legislation that would prevent the next AIG collapse and taxpayer bailout,” said hedge fund manager Michael Masters. “The only explanation is that these companies are being duped by the big banks, who are desperate to escape accountability for the reckless gambling that crashed the economy and know they are not politically popular these days. It’s time for these companies to wake up to the fact they are being used.

The Coalition claims that it hasn’t coordinated with the big banks, but a closer look at the team of financial reform lobbyists working for the Business Roundtable and the Chamber reveals some evidence that it was created as a front group to push Wall Street’s policy agenda. 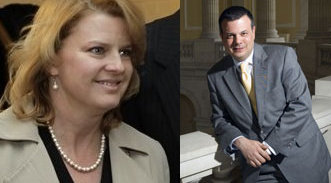 There was only one lobbying firm working for both the Chamber and the Business Roundtable on financial reform issues during 2009: Peck, Madigan, Jones & Stewart, a firm with rich connections to centrist Democrats. Peck, Madigan has lobbied for each Coalition parent around derivatives reform. At the same time, the firm has also lobbied for Deutsche Bank and the International Swaps and Derivatives Association — in other words, for big banks with a healthy appetite for derivatives trading.

Since derivatives lobbyists for the Chamber and the Business Roundtable have so much in common with big bank lobbyists — in fact, they’re the same people — it’s not a giant leap to suspect that this “derivatives end-users” coalition has actually just been set up by big bank executives who are afraid of their own toxicity.

Then there’s the fact that Bill Daley, JPMorgan’s in-house Democratic rainmaker, was a recent chair of the Chamber’s Center on Capital Markets Competitiveness, a big bank-driven effort to shape the financial reform debate. Peck Madigan also lobbied for that group. ThinkProgress has also exposed how the Chamber is working with big banks to kill reform. And JPMorgan CEO Jamie Dimon is on the board of the Business Roundtable, which has hired a number of Goldman Sachs lobbyists.

Unfortunately, the shadow bank lobby is a force to be reckoned with, and has won substantial victories for big banks throughout the financial reform process. In December, for instance, Representative Melissa Bean forced a negotiation with House leadership over federal preemption language in the financial reform bill. Bean succeeded in winning a major concession for the big banks, behind closed doors.

Bean was taking her cues from the shadow bank lobby. Her former chief of staff, John Michael Gonzalez, went through the revolving door in 2009 to become a bank lobbyist. Gonzalez works at the Chamber’s favorite lobbying firm on financial reform issues: Peck, Madigan. Here’s one issue his team was lobbying around on behalf of the Chamber, according to a recent disclosure filing:

(While levels of disclosure are typically woefully lacking in lobbying disclosure filings — and Peck, Madigan has had issues in this area surrounding its work for the Chamber — I applaud the firm for their unusual openness here.) 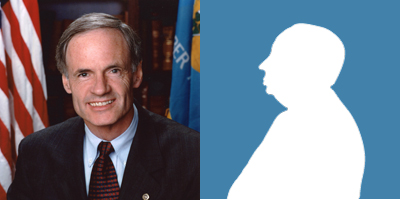 These days, Democratic Senator Tom Carper is the new Melissa Bean. He is sponsoring a preemption amendment that will keep states from being able to implement stronger consumer protections than the federal government. The amendment is clearly big bank-driven. But why Carper? Plenty of other Senators could have gone to bat for the big banks on this issue.

The answer is once again found in the revolving door data we compiled for Big Bank Takeover: Carper’s former chief of staff, Jonathon Jones, is a partner at Peck, Madigan — the same firm that lobbied for the Bean preemption amendment, and the same firm where John Michael Gonzalez, Bean’s ex-chief of staff, now works. Carper and Jones are extremely close, to the point where the Senator has “gushed” to Politico about how much he likes his former chief of staff.

This is how the seeds of financial destruction are sown: with real people leveraging real relationships to win major policy concessions for big banks.

If final negotiations around financial reform happen behind closed doors, as they did when Bean won her preemption fight with House leadership in December, the big bank lobby and its army of well-connected insiders will continue to win on the Hill. Today’s Congress will once again facilitate reckless gambling and predatory behavior by too-big-to-fail banks.

Transparency and openness are the only antidote to a big bank lobby that prefers to operate in the shadows; will Congressional leaders embrace these principles, and negotiate the final elements of the bill out in the open?