There are lots of graphs to be made and insights to be gleaned from LittleSis data on the Bay Area’s corporate elites, which we posted about yesterday (sign up for an API key if you’d like to start playing with it yourself).

Here’s another that I find quite interesting, showing the partisan leanings of the various individuals in the Bay Area’s corporate networks – a variation on two graphs I posted yesterday. Once again, nodes represent people, and edges are drawn between people with two or more shared relationships. But this time, nodes are color-coded according to their partisan leanings (red for Republican, blue for Democrat): 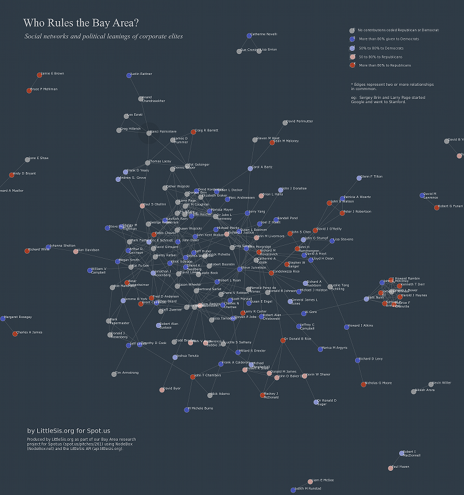 Blue nodes (Democrats), dominate the center of the graph, as you might expect (despite the even split between Republican and Democratic giving that I noted yesterday). Red nodes (Republicans) are scattered unevenly, suggesting that they aren’t as well-networked as the Democrats, who tend to be connected with Silicon Valley institutions.

But what makes the graph interesting is the grey, uncoded nodes – many of the individuals in the densest areas of the graph don’t make political contributions, and so are shaded grey rather than red or blue. Despite being pillars of the Bay Area’s corporate community, and also very well-networked with major Democratic donors, they don’t give money to politicians.

My guess is that if we were to collect similar data on corporate elites in other major metropolitan areas, this pattern would not hold — more individuals at the center of the network would be major donors, in the mold of John Doerr and John Chambers.

Why is the Bay Area different? I’m tempted to chalk it up to Silicon Valley libertarianism – maybe these folks just haven’t found their party.