by Kyle Stone and Kevin Connor

Our research project on the Bay Area’s ten largest corporations was fully funded on Spot.us in early October and has come to a close, but with it we’ve built a lasting resource that we hope will continue to pay dividends for watchdog efforts in California.

We focused on identifying and profiling the most powerful and influential executives, managers, board members, employees, associates, and lobbyists affiliated with each company. In the course of the project we compiled data on over 400 people, added close to 5000 relationships connecting them, published ten in-depth profiles and stories (one of which was picked up by Alternet and Felix Salmon of Reuters), and created several network visualizations.

Our progress is best illustrated by before-and-after social network maps of Bay Area data on LittleSis.  The first was built using data on Bay Area corporate elites (directors and senior executives) available on LittleSis before we began the project.   The second was produced using data compiled in the course of the project.  Nodes represent people, and edges are drawn between people with two or more shared relationships (eg, if two people went to Stanford and are executives at Google). 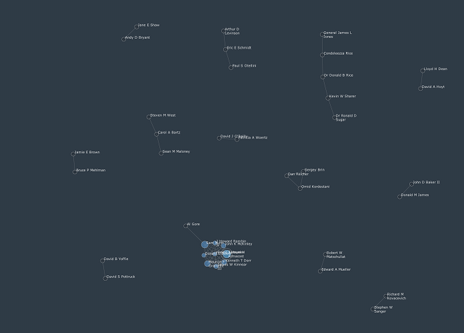 The same, after Spot.us research: 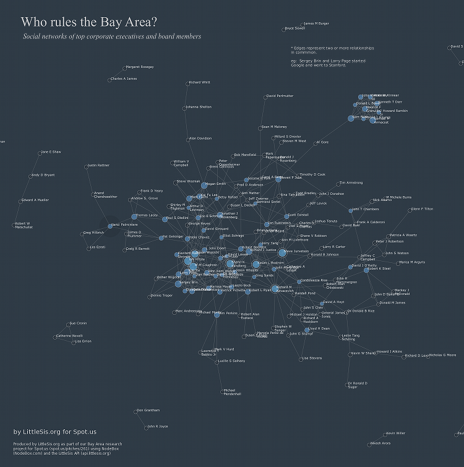 Click through for the full map (and more detail)!

You’ll notice that the network is densest around names like John Doerr (Google board member and legendary venture capitalist), John Hennessy (Stanford president and Google board member), and Sheryl Sandberg (Facebook COO).

The second set of before-and-after social network maps show connections between the Bay Area corporations we researched and organizations that share common leadership or personnel.

Before the research project: 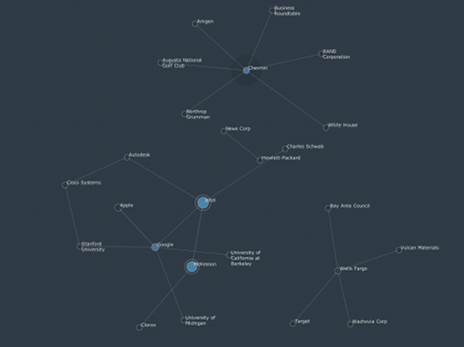 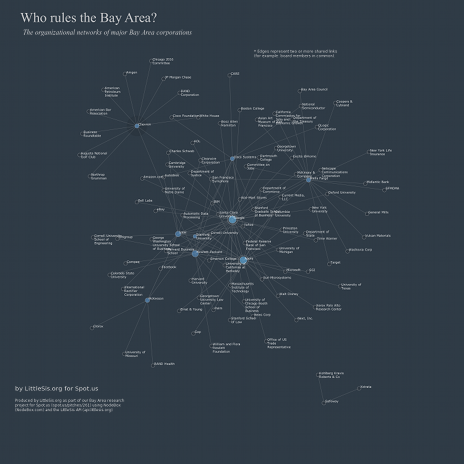 Again, click through for the full map and a closer look.  The network is (somewhat predictably) densest around Apple, Google, Stanford, and other major Silicon Valley institutions. McKesson, Wells Fargo, and Chevron are all set apart, somewhat, from the Bay Area’s center of gravity.

The final graph shows shared political giving habits: which of these individuals tend to give to the same sets of politicians?  Edges represent four or more recipients in common, and nodes are colored according to percentages given to Democrats and Republicans (red = Republican, blue = Democrat). 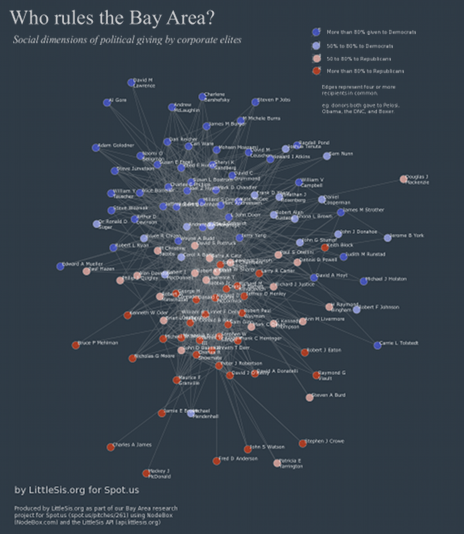 Though Democratic donors appear to be in the majority, this group actually leans slightly red, in terms of amounts given:  $7.8 million to Republicans versus $7.7 million to Democrats over the past twenty years. Republicans also appear to be more densely clustered. Barack Obama does well with these folks, but John McCain does better (over the course of his career, at least. Afull table of ranked political recipients here). These graphs draw on over 10,000 political contributions by close to 300 people over a 20 year period, compiled using OpenSecrets data.

All of this data was compiled by a team of LittleSis staff and volunteer analysts led by Kyle Stone, including ellenp, matthew, kevin, jzuk, priscilla, and ddwriter (also, some credit is due to the LittleSis bot).

Research was pulled together from over 1600 unique urls, and sources included the SEC EDGAR database, Follow the Money, OpenSecrets, CrocTail, Crocodyl, and FedSpending. We paid careful attention to the accuracy and reliability of information entered about each company, adhering to sourcing guidelines that govern the entirety of the LittleSis database.

What have we learned from all of this?  Plenty — and there’s much more to discover in the data set we compiled.  To wrap up the project, we’ve put together a handy list of the top ten interesting facts gleaned from our research.

1. Vulcan Materials, a little-known construction aggregate supply company, played a key matchmaking role in one of the most expensive, complex bank mergers of all time: the Wells Fargo / Wachovia merger.

2. The Bay Area corporate elite’s two major political donors ($1 million plus since 1988), Cisco CEO John Chambers and venture capitalist John Doerr, are on opposite sides of the partisan divide, but they also give to many of the same politicians and PACs — 33, to be exact. The pair also co-founded Technet, a key Silicon Valley lobby.

4. John McCain has received more campaign cash from Bay Area corporate elites than Barack Obama (granted: McCain’s been around a lot longer), and more of them have given to George W. Bush than either McCain or Obama.

5. The Executive Committee of the Federal Reserve Bank of San Francisco is composed of individuals from Chevron, Wells Fargo, Bank of America, Amgen, and McKinsey and Company.

7. Hewlett-Packard’s ex-Director Tom Perkins, at the center of an information leak controversy there, brings an eclectic mix of connections to his work: he co-founded legendary venture capitalist firm Kleiner Perkins, sits on the board of Rupert Murdoch’s News Corp, and was briefly married to romance novelist Danielle Steel.

8. Michael J. Holston, an executive at Hewlett-Packard, played a role in the prosecution of Enron’s CFO, Andrew Fastow, and CEO, Kenneth Lay.

9. Out of ten, only one McKesson director bears significant political or professional ties to Bay Area organizations.

10. Bay Area corporate elites favor a Republican Senator from Utah over a Democratic Senator from California; Orrin Hatch has nearly twice as many donors as Barbara Boxer (though California Senator Dianne Feinstein receives more than Hatch).

Many thanks to all of our supporters for making this project a big success!!